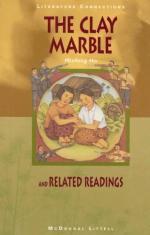 Minfong Ho
This Study Guide consists of approximately 39 pages of chapter summaries, quotes, character analysis, themes, and more - everything you need to sharpen your knowledge of The Clay Marble.

This detailed literature summary also contains Topics for Discussion and a Free Quiz on The Clay Marble: And Related Readings by Minfong Ho.

This novel for young adults is set during the mid-1970s in Cambodia, during a period when the country was ruled by the Khmer Rouge, a Communist dictatorship. It tells the story of a young girl and her family, innocent civilians caught up in a war being fought between that dictatorship and outside governments trying to remove it from power. As the narrative recounts the hardships that Dara and her family encounter as they struggle to stay together and to survive, the novel explores themes of self-confidence and the nature of family.

The book begins with a preface from the author, in which she describes how watching television images of the war in Cambodia inspired her to take action to help the civilians caught up in its damaging effects. She also describes how, when visiting a refugee camp, she was given two gifts by a young girl - a small clay marble, and the opportunity to see her and other children in the camp at play, finding joy in the midst of horrible suffering.

The novel itself begins with Dara, a young Cambodian girl, traveling with her family (her Mother and older brother Sarun) to the Nung Chan refugee camp, where they plan to find safety from the war raging around them (between the soldiers of the Khmer Rouge dictatorship and the Vietnamese government attempting to overthrow it). When they arrive at the camp, the family makes its way to one of the few open spaces left, where they set up camp next to another refugee family - friendly teenaged Nea, solemn Grandpa Kem, Nea's outspoken cousin Jantu (a girl about Dara's age) and Jantu's baby brother. After some initially tentative conversation, the two families join forces to make as good a life as they can in the camp. Jantu and Dara in particular become close friends, with Jantu teaching Dara many things, including how to make toys out of clay, many of which are deliberately destroyed by a bullying orphan, Chnay. One toy, a marble that Jantu says is magic, is particularly fascinating to Dara. Meanwhile, Nea and Sarun experience a romantic attraction to each other.

Eventually, the war comes too close, and the camp becomes dangerous. The two families join the long convoy of departing refugees and hurry, as fast as they can, out of harm's way. When a bomb falls near the convoy, Dara and Jantu are separated from their families, and then from each other when Jantu has to ride with her injured brother in an ambulance. The frantically worried Dara doesn't want to leave her, but Jantu says she has to go find her family, and quickly fashions another clay marble which she says is also magic and will help Dara along her way. After Jantu leaves, Dara tries to catch up with the convoy, but is unable to. She then returns to the refugee camp, in the hopes that her family will be there waiting for her. There she finds the bully Chnay, who tells her her family had been there and had been waiting for her but had moved on. When Dara resolves to follow them, Chnay joins her, and the two eventually make their way to the makeshift base camp for soldiers in a rebel army, which Sarun had joined. The whole while, Dara relies on the magic clay marble for help and courage.

Dara, with what she believes is the help of the marble, manipulates her way into working for the camp cook, and eventually reunites with both families. Sarun is now a soldier, and determined to make good on his new career. Dara, meanwhile, is determined to retrieve Jantu and her brother from the hospital and then return home, where both families can resume their quiet farm life. Eventually, after bullying Sarun into helping her, Dara (accompanied by Nea) makes the journey to the hospital, where she finds Jantu and her baby brother more than ready to leave. On their way back, however, a group of sentries (including Sarun) mistakes them for enemies, and shoot at them. Jantu is fatally wounded and, with Dara at her side, dies the next day, but not before telling Dara that the marble in fact had no magic - all the strength Dara felt, all the opportunities she encountered, were the result not of the marble, but of her own courage. Following Jantu's death, the angry, grieving Dara then bullies Sarun into agreeing to make the trip home with them.

In an epilogue, the ten-years-older Dara narrates how she and both families made their way home, settled, and prospered. She also describes her intention to help her own daughter learn courage the way she did - with the help of a magic marble.

More summaries and resources for teaching or studying The Clay Marble: And Related Readings.