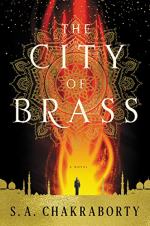 Related Topics
The Kingdom of Copper

S. A Chakraborty
This Study Guide consists of approximately 65 pages of chapter summaries, quotes, character analysis, themes, and more - everything you need to sharpen your knowledge of The City of Brass.

The City of Brass Summary & Study Guide includes comprehensive information and analysis to help you understand the book. This study guide contains the following sections:

This detailed literature summary also contains Quotes and a Free Quiz on The City of Brass by S. A Chakraborty.

The following version of this book was used to create this Study Guide: Chakraborty, S.A.. City of Brass. Harper Voyager, 2018

Nahri is a young trickster with magical healing abilities living on the streets of Cairo. She accidentally summons otherworldly creatures when performing a "healing" ritual on one of her marks. As a result, Nahri must outrun a group of creatures known as ifrits. Helping her is a djinn named Dara, who brings her to the city of Daevabad, a fantastic city where tribes of daevas (gods) live among shafits, disenfranchised half-human, half-godlike creatures. On the way to Daevabad, Nahri and Dara find their lives threatened not only by the ifrits but also by another magical creature called a rukh, which swallows Dara whole. Nahri discovers when this happens, however, that Dara is neither alive nor dead but is somewhere in the magical in-between.

After escaping these creatures, Nahri and Dara cross a lake into the city of Daevabad. When Nahri meets the king, he is astounded because she so closely resembles her mother Manizeh, who was a great healer from a special sects of daevas and original rulers of Daevabad known as the Nahids. The king tells his subjects that he knows Nahri is a full daeva and not shafit, as previously thought, as she has had a curse cast upon her to make her look human.

As Manizeh’s daughter, Nahri is appointed Banu Nahida, the healer of the city, a title that her mother held. As such, she must take lessons in order to learn how to heal magical maladies. The training is difficult, and Nahri doubts herself and her position, but she befriends Ali, prince of Daevaba.

Ali is torn between his sympathies for the shafits and his father, King Ghassan. Ali has been donating money to a group called the Tanzeem, a militant group supporting shafit causes. Unbeknownst to him, however, the Tanzeem have been investing the money in weapons. By supporting the shafit, Ali commits treason. As Nahri and Ali grow closer, Dara grows increasingly jealous and combative with Ali as well as with his brother, Muntadhir, who King Ghassan has planned will marry Nahri because he wants to mend tribal tensions that have been worsening.

When Dara tries to kidnap Nahri to help her escape the pending nuptials, Ali and Muntadhir intervene. During the skirmish, Ali falls into the lake and is possessed by its guardian creatures, the marid, and returns to kill Dara. Upon his return to his father’s palace, he discovers that he has water powers that frighten his father and brother. Also upsetting to his father is Ali’s treasonous relations with the shafit. The story ends with Ali being exiled from Daevabad because he is considered a political and physical threat and with Nahri having to condemn Dara's treasonous actions in front of the Daevas. The book ends with the discovery of another Nahid, Jamshid Muntadhir’s friend, as well as a ring that could possibly bring Dara back from the dead.

More summaries and resources for teaching or studying The City of Brass.

The City of Brass from BookRags. (c)2022 BookRags, Inc. All rights reserved.