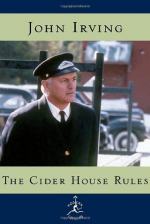 John Irving
This Study Guide consists of approximately 39 pages of chapter summaries, quotes, character analysis, themes, and more - everything you need to sharpen your knowledge of The Cider House Rules.

This detailed literature summary also contains Topics for Discussion and a Free Quiz on The Cider House Rules by John Irving.

The Cider House Rules is John Irving's sixth novel. The story follows two main characters, Dr. Wilbur Larch and Homer Wells. Dr. Wilbur Larch is an ether addict, the founder of the St. Cloud's orphanage, and an undercover abortionist. Dr. Wilbur Larch offers his services to women who are giving up their babies for adoption, as well as providing safe abortion services to women who are early enough on in their pregnancy to abort the baby. The second primary character of the novel is one of the orphans, Homer Wells, who is never adopted by a permanent family.

Although Homer Wells has the opportunity to go home with several families during his time at the orphanage, something always happens to draw him back to the orphanage. His attraction to the orphanage is partially explained by Homer's relationship with Dr. Larch; he sees Dr. Larch as a father figure, and Dr. Larch considers Homer, who is the oldest child at the orphanage, his son. Each time a family tries to adopt him, Homer finds some peculiarity in the family that draws him back to St. Cloud's orphanage. In the end, Homer Wells returns for good to what has become his familiar home, the St. Cloud's orphanage.

During his years growing up the orphanage, Dr. Larch teaches Homer everything he needs to know to become a medical doctor. By the time Homer reaches the age of 18, he has an opportunity to spend the summer working on an apple orchard when a couple his age comes to St. Cloud's from the orchard to have an abortion. While Homer intends on being away for only a few weeks, he ends up staying away from St. Cloud's until after Dr. Larch passes away, decades later.

In the end, Homer comes full circle. After living the first 18 years of his life at St. Cloud's, he adventures beyond the orphanage, eventually traveling to Maine. When Homer is an adult and a father, he returns to St. Cloud's to take over the role of Dr. Larch. Homer is able to take over Dr. Larch's role because Homer assumes the identity and credentials of a fake doctor, which Dr. Larch created in honor of one of the orphans who passed away at the orphanage—Fuzzy Stone.

More summaries and resources for teaching or studying The Cider House Rules.