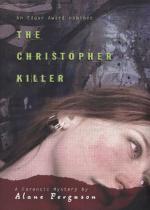 Alane Ferguson
This Study Guide consists of approximately 44 pages of chapter summaries, quotes, character analysis, themes, and more - everything you need to sharpen your knowledge of The Christopher Killer.

This detailed literature summary also contains Topics for Discussion on The Christopher Killer: A Forensic Mystery by Alane Ferguson.

"The Christopher Killer" by Alane Ferguson is a forensic mystery novel about Cameryn, a seventeen-year-old girl who begins to work as the assistant to the county coroner, her dad. When Cameryn is called to aid in the autopsy of her friend who happens to be the recent victim of the serial killer known as the Christopher Killer, her dedication to finding justice puts Cameryn's life in danger. "The Christopher Killer" is an intriguing and entertaining forensic novel that is sure to capture readers' attention.

After convincing her father, the county coroner, to hire her as his assistant, Cameryn excels at her case, proving her knowledge of forensics and her excellent instincts. She is plagued by Deputy Justin Crowley. Her father dislikes the deputy for an unknown reason. Cameryn's second case is a murder and she is devastated when she recognizes the victim as her nineteen-year-old friend and co-worker, Rachel Geller. She is determined to identify the killer who they suspect is a serial killer known as the Christopher Killer after they find his calling card, a St. Christopher medal, in Rachel's bra. After Dr. Moore dismisses Cameryn from the autopsy because of her know-it-all attitude, she discusses the case with Justin and learns that her father dislikes the deputy because he is friends with Hannah, Cameryn's mother who abandoned her when she was very young.

Renowned psychic, Dr. Jewel, plans to visit Silverton to aid in the investigation because he claims Rachel's spirit visited him. Cameryn visits Dr. Jewel with her best friend, Lyric, to clear their friend Adam of suspicion since he was the last person to be seen with Rachel, but some of Dr. Jewel's claims begin to convince Cameryn that he is legitimate and seem to point to Justin. When she revisits Dr. Jewel, she notices him mixing DMSO in his drink, which could cause some of the oddities she noticed during Rachel's autopsy. However, when Dr. Moore refuses to run the tests, Cameryn sneaks into Dr. Jewel's hotel room to search for evidence. She hides under the bed when Dr. Jewel returns to the room and she overhears him talking about a car rental on the phone, which disproves his alibi. Unfortunately, Cameryn's phone rings as Dr. Jewel leaves the room and hearing it, he returns with the intentiom to kill Cameryn, confessing he became Christopher Killer to ensure the success of his television show.

Justin and Sheriff Jacobs arrive in time to save Cameryn and arrest Dr. Jewel because Dr. Moore called them after running tests that confirmed Cameryn's hypothesis. Later, Cameryn finally reads Hannah's letter, learning her mother left because she could not deal with the death of Cameryn's three-year-old twin sister. Cameryn did not know that she had a sister before reading the letter. Cameryn dials Hannah's phone number.

More summaries and resources for teaching or studying The Christopher Killer: A Forensic Mystery.