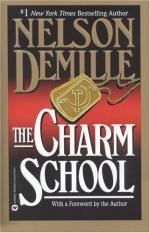 This detailed literature summary also contains Topics for Discussion and a Free Quiz on The Charm School by Nelson Demille.

A young American man named Gregory Fisher drives his Pontiac Grand Am into Moscow after first losing his way near the battlefield at Borodino. Fisher encounters someone in the pine forest at Borodino who claims to be Major Jack Dodson, an American pilot who was captured by the Vietnamese nearly twenty years earlier. Dodson tells Gregory Fisher a fantastic story about a place called Mrs. Ivanova's Charm School.

Fisher arrives in Moscow shaken and afraid for his own safety. He contacts the American embassy and tells Lisa Rhodes that he is sure someone is following him, watching his every move. Lisa Rhodes passes the call to Colonel Sam Hollis, who goes to the Rossiya Hotel to pick up Gregory Fisher. By the time Hollis arrives at the Rossiya, Gregory Fisher has disappeared. The next day, the American embassy is notified of Fisher's death. Russian authorities say that Fisher was killed an automobile accident near the town of Mozhaisk. According to the Russians, Gregory Fisher never reached Moscow.

Sam Hollis and Lisa Rhodes travel by car from Moscow to Mozhaisk to pick up Gregory Fisher's body from the morgue. Before going to Mozhaisk, however, they stop in the pine woods not far from Borodino, re-tracing Gregory Fisher's steps. At Mozhaisk they meet Colonel Burov, who proves to be Sam Hollis's nemesis. Burov is a cruel KGB officer who is determined to stop Sam Hollis from finding out about the Charm School. After spending the night at a small collective in Yablonya, Sam and Lisa return to Moscow and tell CIA Station Chief Seth Alevy what they have discovered. Subsequently, Sam and Lisa are told that the Russian authorities have decided to revoke their diplomatic immunity. They must leave Russia.

After boarding a plane to Frankfurt, the flight is routed to Minsk because of a supposed bomb threat. Sam and Lisa are separated from the other passengers and are taken by helicopter to Mrs. Ivanova's Charm School. Colonel Burov threatens to kill Sam and Lisa if they refuse to work as instructors at the KGB facility. They agree to work for Burov while Sam tries to develop an escape plan. In the meantime, Seth Alevy and three other Americans arrive at the Charm School to rescue Sam and Lisa. Alevy's original plan is to leave them behind, however, and kidnap Colonel Burov, who will be a captive instructor at the CIA's American Charm School.

Seth Alevy is killed by KGB gunfire and Sam, Lisa, Burov and Major Dodson all escape to safety. Their futures are uncertain. No one knows for certain whether the CIA has a Charm School on American soil.