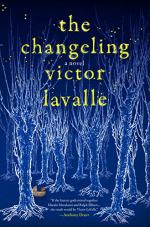 Victor LaValle
This Study Guide consists of approximately 43 pages of chapter summaries, quotes, character analysis, themes, and more - everything you need to sharpen your knowledge of The Changeling.

The Changeling: A Novel Summary & Study Guide includes comprehensive information and analysis to help you understand the book. This study guide contains the following sections:

This detailed literature summary also contains Quotes and a Free Quiz on The Changeling: A Novel by Victor LaValle.

The following version of this book was used to create this study guide: LaValle, Victor. The Changeling. Spiegel & Grau, 2017.

From the outset, the omniscient third-person narrator classifies the novel as a “fairy tale” (3). This fairy tale starts in 1968 at a fraudulent New York City modeling agency where Lillian Kagwa, the agency’s secretary, and Brian West, a parole officer investigating the agency’s founder, first cross paths. Years later, they fall in love, get married, and give birth to a son, Apollo. One day, Brian abandons them, leaving Lillian to support their four-year-old son on her own.

Throughout Apollo’s childhood, a dream of his father haunts him. Then, in 1989, 12-year-old Apollo hears a knock at the door: Someone, presumably Brian, dropped off a box containing mementos of Brian and Lillian’s relationship and a children’s book about a kidnapped baby who is substituted with a disguised goblin baby. Apollo becomes an avid reader then begins selling his finished books and magazines. Within five years, his literary hobby becomes a business.

Apollo’s business becomes his full-fledged career. At a library sale, he, now 34, meets librarian Emma Valentine, his future wife. Before they fall in love, get married, and have a child of their own, Emma takes a one-year trip to Brazil, where a woman ties a red string around her wrist to fulfill three wishes once it falls off. Upon her return to New York, Apollo cuts off the string, promising to make her three wishes come true.

Apollo, now 37, meets Emma, now nine months pregnant, and her best friend at a restaurant. While Emma is in the bathroom her best friend tells Apollo two of Emma’s three wishes: a husband and a baby. Before she can share the third wish, Emma starts contractions. Emma and Apollo rush home on the subway, but the train gets stuck and Emma has to give birth there. Apollo asks to name the baby Brian.

As Emma and Apollo adapt to parenthood and return to work, Apollo meets his best friend, Patrice Green, at an estate sale, where he uncovers a rare signed copy of To Kill A Mockingbird. Emma starts receiving texted pictures of her son that disappear.

Six months after the birth of their son, Emma’s mental and physical health deteriorates; Apollo’s dream returns to him. After a verbal altercation between the two of them, Apollo wakes up chained to a chair. Emma knocks her husband unconscious and kills their son. Then she vanishes.

In reaction to Emma’s crime Apollo, armed with a gun, storms into the library demanding to know Emma’s location. He is arrested and serves three months in jail. After his release, he visits Patrice and his wife Dana for dinner and relinquishes the rare copy of To Kill A Mockingbird to them, instigating his friends’ concern about his possible suicidal tendencies. They call Apollo’s mother to check on him at his apartment where she later tells Apollo a secret: Brian wanted to be a part of their life, but she kicked him out.

As a condition for Apollo’s release, he must attend group counseling. At one of these meetings, another woman makes the same claims as Emma did about her child, and Apollo accuses the woman of planning to murder her child and storms out. One of the attendees, William Wheeler, chases Apollo down and identifies himself as an interested buyer for the To Kill A Mockingbird copy.

En route to sell the book to William, Patrice lets slip that he follows a tribute page on Facebook for Brian, where thousands of Internet trolls leave hateful messages. At their meeting, William shares with the two men his intention for the purchase: He wants to win his wife and children back, and that book was her favorite. Following this exchange, William texts Apollo and tells him he knows Emma’s location.

William and Apollo navigate to an island, where a colony of women and children, led by a witch named Cal, live. Cal warms up to Apollo, as Emma spoke highly of him, but not William, who deceived Apollo: William siphoned all the money from his wife’s account to pay for the book. Worse, he killed his own daughter. Cal reveals that the story Apollo’s father left him, about a changeling, is true. Cal also tells Apollo Emma believes she found Brian. William further exposes himself as one of the tribute page’s online trolls and his allies arrive to the island, forcing the commune to evacuate.

Apollo and Patrice exhume Brian’s gravesite and discover Brian’s corpse is not, in fact, that of a human baby. On his way to find Emma, Apollo follows a man who leads him to her. He turns out to be William’s father, and he tells Apollo his own tale about a troll and the children they must offer up to satiate the beast. Apollo murders the man and reunites with Emma. On the phone, Lillian tells Apollo his father tried to kill him, which is why she kicked him out.

Emma and Apollo light the house on fire to destroy evidence of Apollo’s crime. On their way out, they find William in the basement and kill him too. They escape through a tunnel in the basement, defeat the troll, and save Brian. In the end, Emma tells Apollo her third wish: a life full of adventure.

More summaries and resources for teaching or studying The Changeling: A Novel.

The Changeling: A Novel from BookRags. (c)2022 BookRags, Inc. All rights reserved.