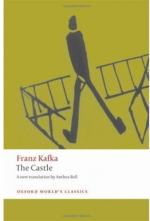 Franz Kafka
This Study Guide consists of approximately 41 pages of chapter summaries, quotes, character analysis, themes, and more - everything you need to sharpen your knowledge of The Castle.

The Castle Summary & Study Guide includes comprehensive information and analysis to help you understand the book. This study guide contains the following sections:

This detailed literature summary also contains Topics for Discussion and a Free Quiz on The Castle by Franz Kafka.

K., a land surveyor, arrives late at night in an anonymous town which sits at the foot of a large castle. After some confusion about his identity and whether he has permission to be there, K. is able to get some sleep. K. tries to go up to the Castle himself but finds the thick snow too tiring. He stops for awhile in the house of a master tanner named Lasseman, but the inhabitants are only too eager to get rid of him. He returns to his inn and meets his two, identical assistants, Artur and Jeremias, whom he decides to refer to simply as "Artur". A young boy named Barnabas comes to the Inn with message for K. It is a letter from Klamm, a Castle official and K.'s director, which tells him to report to the village chairman. Thinking that Barnabas is returning to the Castle, K. travels with him but finds himself instead at Barnabas' house, where he meets Barnabas' sisters, Olga and Amalia. He goes with Olga to the Gentlemen's Inn where he meets Frieda, Klamm's mistress. The two hit it off very quickly and make love on the floor of the bar. She decides to leave the Inn and go with him. They return to K.'s Inn where he is berated by the landlady, who, it turns out, is Frieda's mother. She does not like K. and discourages him from attempting to meet Klamm. K. is not discouraged however, but leaves first to talk to the village chairman. The chairman informs him that, unfortunately, there has been a mistake; the town has no need for a land surveyor. K. returns to the inn and, before long, is offered a post as school janitor by the chairman. It is not much, but Frieda urges him to accept it since they do not have much else going for them right now.

They move into the school's gymnasium and K. finds himself increasingly irritated by his assistants. They were once just constantly underfoot, but now they seem to be actively wanting to get him in trouble. He sends them away and locks the door. Anxious to hear from Klamm—whom he still is trying to meet—K. goes back to Barnabas' house to see if there is any news. Barnabas is not there but he is pulled into a long conversation with his sister, Olga. Olga explains how their family came to have such a bad reputation. It all started when Amalia rejected the invitation to come to the room of one of the Castle officials. The situation might only have been temporary, but the family did nothing to combat it and are now cursed for the rest of their lives. Their only ray of hope in the whole situation is Barnabas' connection with the Castle as messenger and, she explains, that it had not been going well at all until K. arrived. Barnabas had been waiting in vain in an office in the Castle for months before he was given his first letter, the letter which he delivered to K. at the Inn. When K. leaves, he finds his assistant, Jeremias. He tells K. that Frieda was so upset by K.'s long, unexplained absence that she has decided to leave him and be with him, Jeremias, instead. While they are arguing, Barnabas arrives with a message inviting K. to see Erlanger, one of Klamm's secretaries, at the Gentleman's Inn. K. goes and accidentally stumbles into the room of another secretary named Buergel. K. is so tired that he is barely able to remain conscious while Buergel explains the best way to extract favors from the Castle, information which should be vitally important to K. but which is probably lost on him. He is called to the next room by Erlanger who orders him to convince Frieda to take her position back in the taproom and then leaves. He is still incredibly tired and is allowed by the landlord—who is frustrated that K. had lingered so long at all in the first place—to sleep in a barrel in the taproom. When he wakes up twelve hours later, he talks to Pepi's, Frieda's replacement who is going to be forced to return to being a chambermaid. Pepi does not like Frieda and argues that Frieda never really loved K. but only married him for attention. She offers to let K. stay with her and the other chambermaids in the Inn and K. accepts. The landlady, seeing that he is finally awake, begins to chastise him for a "cheeky" comment he made before he went to sleep. Afterwards, the inn's coachman, hoping to exploit K.'s apparent connection with Erlanger, tells K. he can stay with him and his family. K. accepts. The story then ends in the middle of a sentence.

More summaries and resources for teaching or studying The Castle.

The Castle from BookRags. (c)2022 BookRags, Inc. All rights reserved.