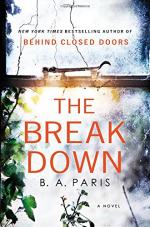 The Break Down Summary & Study Guide

B. A. Paris
This Study Guide consists of approximately 64 pages of chapter summaries, quotes, character analysis, themes, and more - everything you need to sharpen your knowledge of The Break Down.

The Break Down Summary & Study Guide includes comprehensive information and analysis to help you understand the book. This study guide contains the following sections:

This detailed literature summary also contains Quotes and a Free Quiz on The Break Down by B. A. Paris.

The following version of this book was used to create this study guide: Paris, B A. The Break Down. New York: St. Martin's Press, 2017.

The narrative, told from Cassandra’s first person perspective, begins with Cassandra (Cass) leaving a gathering with fellow teachers at the end of a school year. She is anxious to get home to her husband even though she has called him and knows that he will not be waiting up for her because he has a migraine. Even though she promises him that she will not, Cass takes a shortcut through the woods. Along the way, she sees a stopped car and struggles with whether she should stop and help the woman in the car or continue driving. She decides to stop ahead of the car, but she continues home when the woman does not imply that she needs help. The next day she hears that a woman died on the same road. She assumes that the woman is the same one she saw and begins to feel guilty for not doing more to help her. Her guilt increases once she discovers that the dead woman is Jane Walters, someone with whom she had recently become friends.

At the same time, Cass fears that she is becoming like her deceased mother and is showing signs of an early onset of dementia. She has been forgetting a lot of things lately. The most recent is a present that her best friend, Rachel, says that Cass suggested and agreed to pick up for a mutual friend. Things worsen for Cass when she begins to receive phone calls from a person who does not speak when she answers the phone. She also begins to see a man around the house whom she does not recognize. No one knows why the silent caller scares her so much, as she has not told anyone about what happened on the night that Jane died (with the exception of an anonymous call she makes to the police.) Her husband, Matthew, finally talks to her about her memory loss and suggests that she talk to the doctor. She agrees to do so, but she becomes angry when she discovers that Matthew has already talked to him about her. The doctor prescribes pills for her. However, Cass does not want to take them. Her husband finally convinces her to do so. The pills make her sleep and it is not long before she is sleeping though the day. The effects of the pills wear off by the time Matthew comes home, and she does not take them when he is home on the weekends. As Matthew also brings her pills in the morning, she stockpiles the ones that she does not take.

One day, after a particularly bad period with Matthew, who is beginning to become impatient with her, she wakes up not feeling well and calls emergency services. It appears to the doctors that she took an overdose. At first she denies it, but the pills are in her bloodstream, so she wonders whether or not she did. After this incident, she feels as if she has to take control of her life and goes to talk to Jane’s husband. She tells him how she saw Jane but did not realize it was her and had driven away. He says that Jane’s death is not her fault, and he forgives her. He also convinces her that the murderer is not the person calling her. He thinks that it is someone she knows. After this visit, she stands up to the silent caller. Still, she needs to get out of the house, and she goes to meet Rachel. She arrives there early and sees Rachel talking to John, a fellow teacher who wanted to date Cass before she met Matthew. When Rachel leaves, a young girl who is also in the restaurant comes to Cass and gives her a phone that she says belongs to Rachel. Cass does not believe her at first, but then she takes the phone. She calls the number that is in it and recognizes Matthew’s voice. Reading the text messages in the phone reveal that Rachel and Matthew have been manipulating her mind by making the silent calls and orchestrating situations to make her think that she is losing her memory. Rachel and Matthew have also been having an affair.

Cass verifies that what she has read is true and then gets even. She calls the police and implicates Matthew and Rachel in Jane’s murder. As it turns out, Rachel did kill Jane. Her motive was to keep Jane from telling Cass about the affair. This was important because she needed Matthew in order to get Rachel’s money once they drove her crazy enough to have her committed to a mental institution. Rachel felt that she deserved part of Cass’ inheritance because she was so close to Cass’ family and she helped Cass with her mother during her illness. Once Cass discovers the truth, she decides that it is time to start living her life freely and happily.

More summaries and resources for teaching or studying The Break Down.

The Break Down from BookRags. (c)2022 BookRags, Inc. All rights reserved.