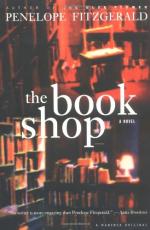 Penelope Fitzgerald
This Study Guide consists of approximately 25 pages of chapter summaries, quotes, character analysis, themes, and more - everything you need to sharpen your knowledge of The Book Shop.

Survival of the Fittest

To defy those who have the power is to court danger, no matter how seemingly civilized your actions may appear.

If Florence Green had sought the permission and patronage of Violet Gamart before she bought the Old House and converted it into a bookshop, or if she had agreed to move to other premises once she was told Mrs. Gamart had other plans for the Old House, she may have been allowed to make a success of her business. The bookshop relied on the support of one powerful. Upper-class figure, against the attacks of another.

More summaries and resources for teaching or studying The Book Shop.