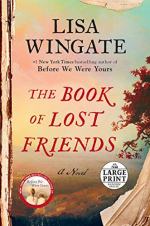 Lisa Wingate
This Study Guide consists of approximately 89 pages of chapter summaries, quotes, character analysis, themes, and more - everything you need to sharpen your knowledge of The Book of Lost Friends.

The Book of Lost Friends Summary & Study Guide includes comprehensive information and analysis to help you understand the book. This study guide contains the following sections:

This detailed literature summary also contains Quotes and a Free Quiz on The Book of Lost Friends by Lisa Wingate.

The following version of the novel was used to create this study guide: Wingate, Lisa. The Book of Lost Friends. Ballantine Books, April 7, 2020. Kindle.

In the novel The Book of Lost Friends by Lisa Wingate, Hannie Gossett, a slave separated from her mother when she was only six, becomes a spokesperson for the lost as she travels with her half-sister, Juneau Jane LaPlanche, in search of Juneau’s father. The two compile what they call The Book of Lost Friends as they collect names of people searching for family members from whom they were separated as a result of slave trading. More than 100 years later, this Book of Lost Friends is discovered. It had been sealed in a time capsule in a marble pedestal at the Carnegie Library in Augustine, Louisiana. Hannie and Juneau were members of a ladies club that secured a grant to build a library grander than what the Whites had at the time. One hundred years later, Benedetta “Benny” Silva and her students open the time capsule. They include the stories of the lost friends in a living history presentation.

In her novel, Wingate presents the parallel stories of Hannie, set in 1875, and Benny, set in 1987, to define the social injustices that still face Blacks years after the emancipation of slaves and ending of segregation. The story begins with Hannie as she dreams of the day that she was separated from her mother at a slave-trading yard when she was only six years old. Hannie's chapters are alternated with chapters told from the point of view of Benny, a first-year teacher who has taken a job at a low-income school to get her student loans forgiven.

Hannie becomes caught up in the kidnapping of Juneau and Missy Lavinia Gossett, both daughter of William Gossett, owner of Goswood Grove Plantation. Hannie is sent to spy on Juneau, William’s illegitimate daughter, when she is seen sneaking into the plantation house. Tati, Hannie’s guardian and a sharecropper on the plantation, fears that William has died and Maude, William’s wife, will not honor the sharecrop agreement. Hannie hears Missy and Juneau arguing over their inheritance and arranges to drive the carriage for which Missy has called to take her to a port city where she claims Mr. Washburn, her father’s lawyer, has an office.

Hannie realizes the girls have been tricked and kidnapped when she hears a moan coming from one of the trunks being loaded onto a ship and sees Missy’s gold locket drop from one of those trunks. Hannie follows the trunks onto the ship and then to a cabin in the woods after they are unloaded during one of the stops. Hannie rescues Missy and Juneau, both of whom are unconscious. She happens upon a small Black church where they stay until Juneau recovers. Missy gains consciousness, but her mental capacities never return to normal.

It is Juneau who tells Hannie that the newspaper articles tacked up on the walls of the church are advertisements put in a church newspaper by Blacks seeking members of their family from whom they have been separated. Hannie becomes obsessed with the idea of finding her family as well as helping other Blacks find their lost friends. As she, Juneau, and Missy travel through Texas looking for Juneau and Missy’s father, they collect names of missing family members and ask about those family members where ever they go. Juneau complies the names into a ledger book that she and Hannie call The Book of Lost Friends.

Later in 1987, Benny is trying to find some way to get her students interested in stories and the lessons those stories can teach. She manages to get Granny T, an elderly lady and mentor of many of her students, to talk to the class about her family’s story. Granny T dresses up like her grandmother, Hannie Gossett, to tell the story of how the Black ladies of the community, including Hannie, secured a Carnegie grant to build a better library than the one the Whites had. Her presentation inspires the students to research the history of their ancestors and put on a living history show that they decide to call Tales from the Underground.

Benny receives permission from Nathan Gossett, a descendant of William and the owner of Goswood Grove, to use documents from the plantation house in the research. Regardless, the presentation encounters backlash when members of the public see Benny and her students rehearsing the program. Benny is called into the principal’s office the next school day. During the meeting, a school board member, who happens to be the wife of Manford Gossett, a relative of Nathan who holds a grudge because he did not inherit the plantation, tells Benny that her students will not be allowed to perform their presentation.

Benny realizes that the Gossetts have trouble with their history because their ancestors owned slaves. She and Nathan do not realize until they uncover a project on which Nathan’s sister, Robin, was working on when she died that the Gossetts are hiding another secret. Although Juneau Jane was a direct descendant of William Gossett, cousins of William fought against her inheriting the plantation, taking their fight up to the Louisiana Supreme Court. The male Gossetts were given control of the plantation and Juneau was called a sham.

At the same time, Benny and Nathan find information about a Century Chest sealed in a marble pedestal at the Carnegie library. Included in this Century Chest is the Book of Lost Friends. Benny’s students perform their living history at the opening of this chest, a presentation that gives them the opportunity to present the stories of slaves as well as plantation owners at various museums, libraries, and schools. At the conclusion of the novel, the students have been invited to the Louisiana State Capitol to read entries from the Book of Lost Friends.

More summaries and resources for teaching or studying The Book of Lost Friends.

The Book of Lost Friends from BookRags. (c)2022 BookRags, Inc. All rights reserved.