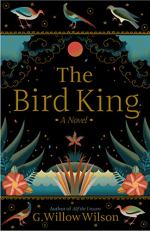 This detailed literature summary also contains Quotes and a Free Quiz on The Bird King by G. Willow Wilson.

The following version of this book was used to create the guide: Wilson, G. Willow. The Bird King. Grove Press, 2019.

In G. Willow Wilson's The Bird King, 17-year-old Fatima is born into slavery as the Iberian sultan's concubine. Having never known a life outside her existence in The Court of Myrtles, Fatima lives to serve her masters Abu Abdullah and his mother Lady Aisha. Her only true friend is the court cartographer, Hassan. Because Hassan is gay and possesses an uncanny talent for rearranging seemingly fixed spaces via his drawings, the court does everything they can to conceal and entrap him.

When a band of Spanish soldiers and their attending ladies appear at the court, its members panic. They realize that their invaders are attempting to overthrow their empire and convert them to Catholicism. Lady Luz, Queen Isabella's righthand advisor attempts to befriend and trick the women of the court into giving up their freedom. When she discovers Hassan's mystifying talents, she arranges he be a part of the peace treaty, demanding Hassan be captured and tortured for sorcery and sodomy.

When Fatima discovers her plans, she and Hassan flee the palace through an underground tunnel of Hassan's devising. In the tunnel, Lady Aisha introduces the jinn Vikram as their guide and lets them go free. Vikram, half-dog, half-man, accompanies the two young friends through the forest and towards the sea. Unaccustomed to the outside world, Fatima and Hassan weaken rapidly. Through Vikram's help and Hassan's map, they secure shelter so they can rest. However when they encounter Luz and Marquez hot on their trail, Vikram demands the two run towards the docks. The friends seize a boat and cut it free.

On board, a Breton monk, Gwennec appears from below deck and attacks Hassan. He insists on turning around and reporting them to the inquisitors. Fatima eventually convinces him to sail them as far as the closest town so they can stock up on provisions. They tell Gwennec their plans to travel to The Isle of Qaf. Though Gwennec agrees to help them reach Marbella, he scoffs at their plan, telling them the island is only a myth, impossible to reach.

They part ways after reaching Marbella. Yet just as Fatima and Hassan are about to set sail again, Luz and Marquez recapture them. Marquez attempts raping Fatima but she stabs him before he can, demanding to see Luz. Luz tells Fatima she should convert to Catholicism in order to save her life and find ultimate freedom. Fatima pretends to agree, then sneaks out of the tent at night. Before returning to the boat, she frees Hassan and Gwennec.

Back at sea and overjoyed to be alive, Fatima and Gwennec sleep together. Their intimacy, however, upsets Hassan who is jealous of Fatima's attention. The next morning Fatima and Gwennec decide they cannot be together as Gwennec's heart belongs to God. Shortly thereafter, the companions notice the Castilian ships just behind them. They furiously attempt plotting a shortcut to secure their escape, however the ships overtake them. As they are firing cannons at their much smaller vessel, Fatima demands Gwennec and Hassan use one of the cogs to save their lives, risking her own chances for survival.

Vikram, however, appears and saves Fatima from drowning, leads her to shore, and mends the significant wound down the middle of her face. On land, Fatima realizes they have reached Qaf. When she asks Vikram to lead her to the Bird King, he shows her to a stream and tells her to look into it. Seeing her own reflection, she realizes she is the king of the birds. Shortly after she is reunited with her friends. In the coming weeks, the three are joined by a series of other oppressed souls. Together they gradually turn the island into a place of solace and peace.

One day Luz washes up on the beach. Despite Gwennec's urgings to kill her, Fatima spares her life. She informs them that more ships are on their way. Indeed, the Castilian ships arrive on the horizon shortly thereafter. The island inhabitants work together to devise a plan, fighting fiercely to protect their island and lives. Eventually the sea serpent destroys the attackers and ends the battle. Many lives, however, are lost, including Gwennec's, who Fatima only then realizes she is in love with.

In the aftermath, Fatima realizes someone must leave the island and destroy the map so no further invaders will be able to find them. When she volunteers herself, everyone disagrees. Eventually Luz demands that she be the one to leave. Fatima sends her off.