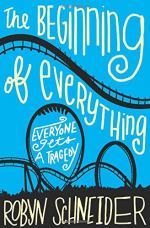 The Beginning of Everything Summary & Study Guide

Robyn Schneider
This Study Guide consists of approximately 52 pages of chapter summaries, quotes, character analysis, themes, and more - everything you need to sharpen your knowledge of The Beginning of Everything.

The Beginning of Everything Summary & Study Guide Description

The Beginning of Everything Summary & Study Guide includes comprehensive information and analysis to help you understand the book. This study guide contains the following sections:

This detailed literature summary also contains Quotes and a Free Quiz on The Beginning of Everything by Robyn Schneider.

Ezra Faulkner believes that everyone has a personal tragedy and that their lives truly begin after that point. This tragedy sets the course of the rest of their lives. For his best friend, Toby, this happens during his twelfth birthday party. Toby, Ezra, and some of their friends are at Disneyland, which is located near their homes. Toby and Ezra sit on the very back seat of the ride. A boy in front of Toby stands up as the ride is entering a tunnel and his head is knocked off his body. Toby catches the head and has little choice but to hold it until the ride comes to an end. Ezra says this is Toby's personal tragedy.

After this event, Toby becomes something of an outcast. Ezra, who is good at sports, begins spending time with members of the tennis team. He is soon included in that group of students and the two boys, once inseparable, no longer spend time together at all.

By the time Ezra is a junior at Eastwood High School, he is very popular. In his mind, he runs the school. He is dating a cheerleader named Charlotte and is the envy of most of the boys in his grade. There's a party one night with lots of alcohol and Ezra attends. He discovers that Charlotte is missing and someone drops a hint that there's something he should see upstairs. By luck, he finds the correct room right away and discovers Charlotte involved with another boy. Ezra is crushed but makes a snide comment as he leaves the room, making it clear he wants nothing else to do with Charlotte.

Charlotte chases him but Ezra goes to his car, parked down the block. He pulls out onto the street just as a black SUV speeds around a blind curve and through a stop sign without even slowing down. The SUV crashes into Ezra's car and several people from the party rush out to take pictures of the wreck. The SUV doesn't stop and it takes Ezra a few minutes to realize that he is seriously hurt. His friends have all been drinking and they rush to get out of the neighborhood before the police arrive, leaving Ezra alone.

Ezra misses the final weeks of his junior year and endures surgeries on his knee and wrist. He's told that he'll never play sports again and he's devastated. None of his friends visit while he's in the hospital and he repeatedly turns down invitations after he's home.

When he returns to school for his senior year, he's still using a cane and going through physical therapy. He dreads the pep rally because he can't maneuver on the bleachers but Toby takes a seat beside him and the two are soon talking as if they never stopped being friends.

Over the coming days, Ezra finds himself included in Toby's group of friends. They are soon joined by a new girl, Cassidy Thorpe. Ezra is enamored with Cassidy and they begin dating. Cassidy urges him to express himself though new clothes and new experiences. Ezra had expected to be recruited by a college for his athletic ability but decides he'll probably just attend a local college. Cassidy pushes him to expect more of himself and he begins applying for out-of-state colleges.

Ezra and Cassidy plan to attend prom together but Cassidy stands him up. Without her, he struggles to make sense of his life and briefly rejoins his former friends. He finds their antics are juvenile and their attitudes ridiculous. Charlotte flirts with him and Ezra realizes he doesn't want to go back down that road, especially when Charlotte says everything would have been okay if Ezra had taken her to the prom like he was supposed to. Ezra reminds her that he was in the hospital during prom and that she didn't even wait with him for the ambulance to arrive.

Ezra decides that he has to push Cassidy into telling him why she broke up. She reveals that her brother had been driving the SUV that hit Ezra. Though her brother didn't seem to be hurt at the time, he developed an embolism and died a few days later. Cassidy says she'll never be able to look at Ezra without thinking about her deceased brother and the role he played in hurting Ezra.

Ezra believes that Cassidy changed him for the better and he tells her so. Cassidy points out that Ezra is confused about the timing. With Cassidy's prodding, Ezra realizes that he ultimately made the decisions to change his life though Cassidy often urged him to think about those choices. The next year, Ezra does go away to college. He leaves the warmth and sun of California for a colder climate.

More summaries and resources for teaching or studying The Beginning of Everything.

The Beginning of Everything from BookRags. (c)2022 BookRags, Inc. All rights reserved.