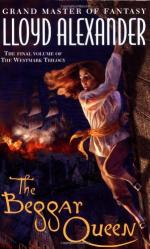 This detailed literature summary also contains Topics for Discussion on The Beggar Queen by Lloyd Alexander.

"The Beggar Queen" is the final book in the Westmark trilogy. It follows Mickle, who in previous books was almost killed as a child and sheltered from her true identity but who rose to the throne after a bloody revolution as a result of the loyalty of her followers and friends — and her own guts and ability as a leader. Mickle is unhappy with her responsibility as a queen but is trying to re-build Westmark after the war.

There are characters from Mickle's past plotting to destroy Westmark. There is Duke Conrad, the uncle to the current king of Regia, who helps bring the self-important ex leader of Westmark, Cabarrus, back to Westmark along with a huge mercenary army from Ankar, a neighboring country. Cabarrus plans to overtake Westmark and execute the queen and all the followers that he considers rebels and traitors to Regia, but who have now become the leaders in Mickle's government. Despite some hints that something is wrong, like the arrival of a killer for Cabarrus named Skeit the queen is taken unawares. Westmark falls under the leadership of Cabarrus and a new government is installed.

Mickle escapes thanks to the help of a pack of thieves that live in The Shambles, the slums of Marianstat. She continues her government in hiding, plotting a revolution to eventually throw Cabarrus out. Unfortunately there are tensions within. Theo, who Mickle loves and is betrothed to is the head of her revolutionary movement, but Theo has debts to pay to Justin who almost died in the last war because of a moment of hesitation. As Theo tries to prove himself worthy of Justin and Justin seeks a government by the people with no queen at all, Cabarrus continues searching all of Westmark for the hidden Beggar Queen and her resistance.

Justin begins marching his own army towards Marianstat. Florian, the greatest commander under Mickle has a host of ships coming to assist Mickle and the revolutionaries. Theo has shared Florian's battle plan with Justin. They cannot win without Justin's forces. To Theo's surprise, Justin demands that Theo show he has nerve and is committed to the cause of the republic. Theo arranges for various attempts at rebellion, knowing that Cabarrus will revenge his actions by killing innocent people. Justin is not satisfied and tries to march on the city before Florian gets there, knowing that it will force Theo to join him and his plans and not the other way around.

An overturned horse cart in the city sets into motion a revolution that ruins the plans of Theo, Florian and Justin. Weasel, thinking that the rebellion has begun starts making a road block with the overturned cart. The people in the street begin helping. Slowly the idea spreads through the city that a rebellion has begun. Citizens start joining in the fight using whatever weapons they can find. Theo and Justin's soldiers join the fight. But Theo and Mickle are taken prisoner and taken straight to Cabarrus.

Meanwhile, Skeit is plotting his own future. Realizing that the war is going against Cabarrus he plans to blackmail Cabarrus. He knows that Cabarrus has been stealing money. The revelation of the evidence would mean Cabarrus was put to death for treason. In a moment of panic, Cabarrus hits Skeit over the head and stuffs him under a desk.

Meanwhile, Florian arrives to a city already in rebellion. Cabarrus is dead, and the city is taken by the people. Justin is among the many dead. However, Mickle reveals that she had signed the marriage certificate making her and Theo married. She then cedes the government over to the people and plans to go into exile where no one can use her name to try and destabilize the new republic.