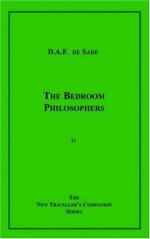 Marquis de Sade
This Study Guide consists of approximately 24 pages of chapter summaries, quotes, character analysis, themes, and more - everything you need to sharpen your knowledge of The Bedroom Philosophers.

This detailed literature summary also contains Topics for Discussion and a Free Quiz on The Bedroom Philosophers by Marquis de Sade.

The Bedroom Philosophers by Marquis de Sade is a simple narrative told over the course of seven dialogues. It tells the story of a group or libertines living in the wake of the French Revolution. Over the course of a day, they completely corrupt a young girl and abuse her prudish mother.

The narrative of the book begins in the anteroom of Madame de Saint-Ange, a proudly lascivious woman. She sits with her brother and lover Chevalier de Mirvel. He has invited notorious libertine and sodomite Dolmance over for the day. Madame is excited by this prospect since her seventeen-year-old ward Eugenie is coming over. Eugenie's libertine father wants her trained in sexual perversion for his own incestuous purposes.

Over the next several dialogues, Madame de Saint-Ange and Dolmance instruct the young Eugenie in the tenets of libertinage. These include such simple points as anal sex being invariably preferable to vaginal and avoiding conception at all costs. The instruction also skews to the philosophical. Dolmance assures Eugenie that sexual gratification is the only reasonable pursuit for a modern woman, that virtue and vice do not exist, and the any means are permissible in the search of greater pleasure. He extols her to emulate nature, which creates and destroys in equal measure without ever questioning the ethics of this destruction.

The Bedroom Philosophers, a pornographic text, can be viewed as Sade's personal indictment of a puritanical post-Revolutionary France. It can also be read as satire, alternately lampooning the excesses of the deposed aristocracy and the bourgeois stuffiness of the Revolutionary class.

More summaries and resources for teaching or studying The Bedroom Philosophers.