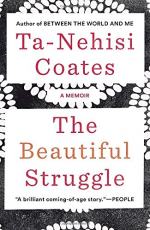 When the story unfolds, the Coates family is living on Tioga Parkway in West Baltimore. Coates comments that the house was not in good condition but matched the declining neighborhood. There were dangers in the neighborhood especially for boys – crack had emerged as the drug of the day. Gangs that were everywhere presented the greatest danger – they either recruited the young black boys of the neighborhood or preyed upon them.

According to Coates, Paul was a Vietnam veteran, married to Linda with two children when he decided to join the Black Panther Party, a movement that appealed to him for its bold, militant stand on civil rights and its revolutionary talk. He became the leader of the local chapter in Baltimore leading him to lose a union job at the airport. Coates writes that the Panthers lived in communes where free sex...