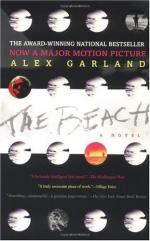 The Beach Summary & Study Guide includes comprehensive information and analysis to help you understand the book. This study guide contains the following sections:

This detailed literature summary also contains Topics for Discussion and a Free Quiz on The Beach by Alex Garland.

The Beach by Alex Garland is the story of a young British man who escapes his life through travel, largely funded by his family. The story is related by Richard through first person. Richard lands in Thailand and receives a map to a beach paradise through the kindness of a stranger, who soon thereafter commits suicide. Richard pairs up with a French couple and the three manage to follow the map and join the beach commune. Paradise turns out to be a sunlit prison run by a kind but stern woman who was one of the founders. Richard tries to blend in to the commune but is soon bored. His indiscretion in sharing the map with some Americans and then not telling anyone about it leads to the ultimate downfall of the commune. After escaping death several times, causing bodily injury and death to almost everyone he meets, and serving as the catalyst to end the dream of the beach commune, Richard arrives relatively unharmed back in England.

The story begins with Richard's arrival in Thailand. His stay at the shoddy guest-house in Bangkok is cut short when he is given a map and when the map creator subsequently commits suicide. Richard meets Etienne and Francoise and the three decide to find the island. They travel to the coast of Thailand and hire a boat to take them to a nearby island, then they swim to the beach paradise. Once arriving at the island, they try to assimilate into the spirit of the place, but there are several factors preventing this; mainly that Richard has shared the map with some Americans who are on their way to the beach, and that the other half of paradise is occupied by gun carrying guards who are protecting an illegal crop of marijuana.

Richard makes friends and enemies in the commune, and for a time is happy to be on the fishing detail and to admire Francoise from afar. During a mission to acquire rice, one of the commune members, Jed, learns that Richard has given someone a map. Soon after, Jed discovers that the Americans are on the next island and coming to the island. Richard is bored with paradise by now, and sees the possibility of the Americans' arrival as an interesting development. Since the death of Daffy, the man who gave him the map, Richard has been dreaming of Daffy, and begins to see him when he is awake as well.

While Jed and Richard are waiting for the Americans to attempt to get to the beach commune, the entire commune gets food poisoning. A rift begins between Bugs' group and Richard's group during this time, and Sal, the leader, is frantic to restore order. Before this can be resolved, three of the commune members, the Swedes, are attacked by a shark. One Swede is killed, one is seriously injured, and one goes mad. Sal decides that a festival is the key to reuniting the commune and restoring peace, so she concentrates on assigning tasks and getting the remaining commune members involved in that activity. Sal assigns Richard to eliminate the deranged Swede so all of the loose ends will be tied up and they can return to normal. It almost works, but as the group is preparing to have their festival, the Americans come ashore and are tortured and killed by the Thai guards. Richard plans to escape the island, and will take Etienne, Francoise, Jed and Keaty with him.

The night of the Tet Festival arrives, and this is the night Richard's group plans to leave the island, using the Americans' homemade raft to escape. To make it easier to get away, Richard's group puts marijuana into the evening stew. The commune also indulges in coconut beer, and soon everyone, including some of Richard's friends, are drunk and hallucinating. Richard slips into the tent where Jed has been caring for one of the injured Swedes and finds Jed asleep. Richard knows Jed will not leave so he smothers the ailing Swede.

Just before Richard and his group attempt their escape, the Thai guards arrive, beat up Richard, and deposit the dead bodies of the Americans in front of the commune. The guards say no more visitors or additions to the commune, and leave. The residents attack the dead bodies in a bizarre display of primitive behavior, and when they discover that the Americans were sent to their island by Richard, they turn on him. Richard's group has wisely armed themselves with spears and defend him, then rush to the rafts and escape the island.

Richard is in England at the end of the book, working at a mundane job, admiring his scars.