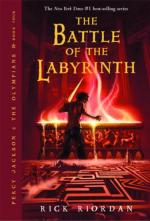 The Battle of the Labyrinth Summary & Study Guide

Rick Riordan
This Study Guide consists of approximately 26 pages of chapter summaries, quotes, character analysis, themes, and more - everything you need to sharpen your knowledge of The Battle of the Labyrinth.

The Battle of the Labyrinth Summary & Study Guide Description

The Battle of the Labyrinth Summary & Study Guide includes comprehensive information and analysis to help you understand the book. This study guide contains the following sections:

This detailed literature summary also contains Topics for Discussion and a Free Quiz on The Battle of the Labyrinth by Rick Riordan.

"The Battle of The Labyrinth" by Rick Riordan is the fourth story in the series revolving around the demigod, Percy Jackson. When the story begins, Percy is a 14-year-old who is ready to begin a school year at a new school. He is on his orientation tour when disaster strikes and monsters attack. This is the beginning of a summer during which Percy has to head down into the Labyrinth with some of his closest friends in order to save the world.

After his orientation, Percy heads to Camp Half-Blood where he learns about the Labyrinth. The maze was designed by Daedalus and according to Greek mythology, is part of King Minos' palace in Crete. Annabeth is intrigued by the Labyrinth and discovers that she is about to lead a quest and it involves passage through the Labyrinth.

Percy discovers that Luke is on his own quest for revenge and plans to use the Labyrinth to enter the heart of camp to destroy it. He finds an entrance with Annabeth to the Labyrinth and descend into it so they can stop Luke and his army. Their goal is to find Daedalus, which is an extremely difficult task since the Labyrinth continuously changes and grows on its own. It causes madness, which frequently leads to death.

The friends fight monsters, free prisoners, solve riddles, and succeed in challenges on their way to finding Daedalus. At one point, Percy becomes separated from the others after he blows up Mt. Helens. He lands on Calypso's island and has to decide whether to become immortal and live in paradise with the beautiful woman or go back to finish his quest to save the world. He makes the difficult decision and leaves.

Even though it's Annabeth's quest, the answer to getting through the Labyrinth lies in Percy. He realizes that they have to enlist the help of a mortal named Rachel. She has the unique ability to see through the Mist. While others struggle to choose between paths in the Labyrinth, she can see the correct route clearly. They eventually reach Daedalus, but he is hesitant to help them.

Grover is on his own quest. He has to find Pan and prove his existence or he will lose his job. While in the Labyrinth, the friends find Pan who is about to cease his existence. He breathes part of himself into each of the members present in the room, except for Nico, who is the son of Hades.

Luke finds Adriane's string, which leads his army out of the Labyrinth into Camp Half-Blood. A fierce battle ensues. Grover bellows, and the sound scares the enemy away. This sound came from the part of Pan that now lived within him. When the battle is over, Daedalus lets himself die, therefore closing down the Labyrinth forever.

More summaries and resources for teaching or studying The Battle of the Labyrinth.

The Battle of the Labyrinth from BookRags. (c)2022 BookRags, Inc. All rights reserved.