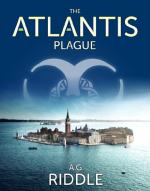 There are guards outside this building, and if they see you, they'll take you into custody, or worse, shoot you on sight.
-- Martin Grey (Chapter 3 paragraph 10)

Importance: Kate's adoptive father Martin explains the importance of Kate maintaining her anonymity as anything less is likely to get her killed. Most of the world believes she is directly responsible for the outbreak called the Atlantis Plague.

I want you to save the human race from extinction.
-- The Atlantean, Ares (Chapter 9 paragraph 4)

Importance: The Atlantean named Ares tries to convince Dorian that he has only the survival of the human species at heart. He is surprised that with all of his intelligence, Dorian is unable to set aside his fear and hatred to see the truth behind his words, but continues to try anyway.

You've really shaken off that used up, rode hard and put away wet look you wore so poorly.
-- Raymond Sanders (Chapter 18 paragraph 6)

Importance: This is Sanders attempt to get under Dorian's skin and to humiliate...