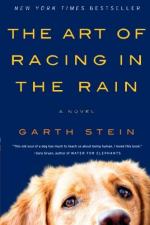 The Art of Racing in the Rain Setting & Symbolism

Garth Stein
This Study Guide consists of approximately 40 pages of chapter summaries, quotes, character analysis, themes, and more - everything you need to sharpen your knowledge of The Art of Racing in the Rain.

Whidbey Island is located in Puget Sound in the state of Washington. It is approximately thirty minutes north of Seattle.

Sonoma is the name of both a county and a city in northern California in the western United States.

Sebring refers to Sebring International Raceway, which is located near Sebring, Florida in the southern United States.

Nürburgring is the site of a well-known motor sports complex in Nürburgring, Germany. The Nürburgring Raceway is famous for its long, windy Northern Loop.

Borneo is an island located in the south China Sea. It is the third largest island in the world.

Sumatra is an island in western Indonesia.

Madrona is a neighborhood in Seattle, Washington.

The Methow Valley of the Methow River is located in eastern Washington.

The Snoqualmie Pass is a mountain pass...

More summaries and resources for teaching or studying The Art of Racing in the Rain.

The Art of Racing in the Rain from BookRags. (c)2021 BookRags, Inc. All rights reserved.