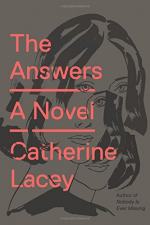 Lacey, Catherine
This Study Guide consists of approximately 71 pages of chapter summaries, quotes, character analysis, themes, and more - everything you need to sharpen your knowledge of The Answers.

The exploration of emotional evolution within the novel shows the boundaries of human emotion and affection and questions how intimate and genuine Mary and Kurt's relationship can become.

The experiment seeks to expand upon the definition of the human spirit and the power of emotional connection in forging relationships with other people. The scientists in the Research Division, Matheson, and Kurt continually reference knowledge of "emotional evolution" as the goal for the experiment, and ultimately, the novel.

Initially, Mary describes herself as somebody who needs to "...get behind [herself], to be slow and quiet with [herself]", a departure from her desperation for other people to "...do things to [her]" (7). Her year of suffering with a mysterious illness has made her passive and clearly the subordinate in her interpersonal relationships. Kurt, in his evident self-confidence and international celebrity represents the opposite of Mary's timidness and lack...

More summaries and resources for teaching or studying The Answers.

The Answers from BookRags. (c)2023 BookRags, Inc. All rights reserved.