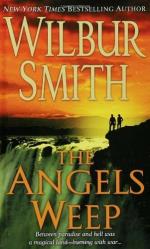 This detailed literature summary also contains Topics for Discussion and a Free Quiz on The Angels Weep by Wilbur Smith.

The Angels Weep by Wilbur Smith is the third book in a trilogy that chronicles the generations of the Ballantyne family, and those who most influenced their paths in life. Beginning with Zouga Ballantyne, the family patriarch, this story takes off at a point in his life when he has already lived on the African continent for some time. He has raised two sons who each in their own way follow in his footsteps. Ralph and Zouga travel through Africa together, searching for the city of Zimbabwe to stake and claim the gold Zouga has already seen once there. The Matabele tribe had banned trespass on the sacred ground of the city of the dead, but they had long since been driven from the area as men of greed and power swept through the continent without conscience.

They find and claim Harkness mine and go on to be part of the installation of railways, telegraph lines and pave the way to civilization. However, the Matabele and remaining natives in Africa have not forgotten their heritage or their pride. They rise up again to battle the white man and his incessant greed, but are driven back once more to the wilderness by Ralph Ballantyne and a group of men that become known as the Ballantyne Scouts. In daring infiltrations, they manage to beat the Matabele tribe again, sending them into the hills where many starve but the remaining members do not lose hope completely. A treaty is negotiated and a peace of sorts is established, but this is not the end.

In part two, the generations have grown, and Zouga and his children are long dead. The time is 1977 and a hundred years have gone by, but the battle for supremacy in the country of Africa is not over. The descendants of King Lobengula are part of the Zimbabwe People's Revolutionary Army (ZIPRA) and continue the battle to undermine and eventually oust the hold white men have on their country. The Ballantyne scouts are resurrected by Roland Ballantyne, the grandson of Ralph who formed the original Scouts to beat back the Matabele uprising that killed his wife and child. Though Roland is successful and manages to strike fear in the hearts of many revolutionaries, he and his scouts are lured to their deaths by Comrade Tungata Zebiwe who is a direct descendant of Bazo the Axe and King Lobengula himself. Tungata, formerly Samson Kumalo but renamed after he joins the revolution, becomes leader of his people and minister of his country after war makes monsters of all men. It is a story of greed, honor, revolution, love and death, and Smith keeps the reader riveted through it all.