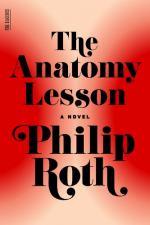 Philip Roth
This Study Guide consists of approximately 34 pages of chapter summaries, quotes, character analysis, themes, and more - everything you need to sharpen your knowledge of The Anatomy Lesson.

This detailed literature summary also contains Quotes and a Free Quiz on The Anatomy Lesson by Philip Roth.

The following version of this book was used to create this study guide: Roth, Philip. The Anatomy Lesson. Farrar, Straus and Giroux, 1983.

The novel opens in New York City in 1973. Successful novelist Nathan Zuckerman has not written a new book since the publication of his highly successful novel “Carnovsky” years prior. Zuckerman is also suffering from chronic pain in his neck and shoulders, which has lasted for 18 months and which doctors have been unable to explain or cure. Zuckerman manages the pain with alcohol and with a prescription pain medication called Percodan. Zuckerman is divorced and has been carrying on sexual relationships with four women, one of whom is a successful painter named Jenny. Zuckerman’s mother died only a few years prior, and Zuckerman has been left feeling isolated and heartbroken in the wake of her death. Zuckerman went to her funeral in Florida, where his estranged brother Henry gave an eloquent eulogy.

In May of 1973, a literary critic named Milton Appel published an essay criticizing Zuckerman’s novel “Carnovsky” as anti-Semitic, despite the fact that Zuckerman himself is Jewish. Years ago, Zuckerman’s now estranged brother Henry had claimed that the anti-Semitism of the book caused their father’s fatal heart attack. In the wake of the death of Zuckerman’s mother and the publication of Appel’s essay, Zuckerman became obsessed with the essay and developed a vendetta against Appel. In December of 1973, Zuckerman is still formulating his rebuttals against Appel. 20-year-old Diana Rutherford, with whom Zuckerman is having a sexual affair and who works part-time as a secretary for Zuckerman, tries in vain to persuade Zuckerman to forget about Appel and Appel’s criticisms of “Carnovsky.”

Zuckerman rather suddenly decides that he wishes to attend medical school, as he is tired of writing, and he sees being a doctor as a much more meaningful profession. He begins to prepare his application despite being very underqualified for medical school. In the meantime, he thinks about Gloria, a married woman with whom he is having an affair. He also thinks about Jaga, a rather cynical woman who originally lived in communist-ruled Poland. Zuckerman is sleeping with Jaga as well. Zuckerman asks her questions about her past, vaguely hoping to use her answers as material for fiction, but he feels as if he cannot relate to Jaga’s story in a way that would allow him to reappropriate it for his writing.

On the airplane ride to Chicago, Zuckerman talks to the passenger next to him and says that he is a pornographer named Milton Appel. Zuckerman becomes excited and stimulated by taking on this invented persona, and he improvises an involved personality and backstory. He maintains the person in Chicago when speaking to his female chauffeur, Ricky. Zuckerman meets with Bobby Freytag at Bobby’s office. Bobby tells Zuckerman that his plan to apply to medical school is quite foolish. He says that Zuckerman would never be accepted and that he should simply return to his highly successful writing career. Bobby then receives a phone call from his father, whose wife has recently died. Zuckerman offers to take the elder Mr. Freytag to the cemetery the next day so that he can visit his wife’s grave. The next day, Zuckerman and the elder Mr. Freytag ride to the cemetery, driven there by Ricky. In the cemetery, Zuckerman has a sudden emotional outburst and loses consciousness.

Zuckerman awakes in the hospital where Bobby works, and Bobby explains that Zuckerman passed out due to excessive consumption of alcohol and Percodan. In the cemetery, he had fallen on a gravestone and injured his mouth, as well as the skin between his neck and chin. Bobby says that Zuckerman will stay in the hospital until he has healed sufficiently and until he has detoxed from the alcohol and Percodan. In the hospital, Zuckerman converses with an emergency room doctor and even follows occasionally the hospital staff during their work once he is well enough to walk around. Zuckerman remains convinced that he wishes to become a doctor.

More summaries and resources for teaching or studying The Anatomy Lesson .