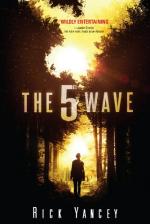 This detailed literature summary also contains Quotes and a Free Quiz on The 5th Wave by Rick Yancey.

The 5th Wave, written by Rick Yancy, is a dystopic novel that takes the genre to a new level. In the novel, aliens invade the earth, bringing death and destruction in five well defined waves. During the first wave, an EMP destroys all electronics on earth. In the second wave, a massive bar is dropped from space that causes total destruction on every coastline in the world. The third wave occurs when a modified Ebola virus wipes out more than seven billion people. Then, in the fourth wave it is discovered that some humans are hosts to the alien forms. The fifth wave is just beginning as teenagers Cassie and Ben make their way separately through a world they no longer understand.

Cassie is alone. She thinks she might be the last human left on Earth. Cassie is a survivor of an alien invasion that has come in four waves. Cassie's mother died from the Ebola virus in the second wave. During the fourth wave, her father was killed by soldiers. Ironically, before the soldiers gunned down her father, she had believed that they would save her family.

Cassie now lives alone in the woods. She has a promise she must keep. Cassie promised her little brother Sammy that she would come for him at the military base where the soldiers took him after their father's death. However, as Cassie makes her way to the military base, she is shot in the leg by an alien hosts she refers to as Silencers. Cassie becomes sick as the snows begin to fall and nearly dies. Cassie is rescued by a young farm boy, Evan. However, Cassie soon comes to suspect Evan is a Silencer, perhaps even the Silencer who shot her.

Ben Parish is living in a refugee camp when he becomes ill with the Ebola virus. Just as Ben believes he is going to die, the camp is raided by soldiers. Ben is taken to a military camp where he is given medications that cure him of the illness. However, Ben is so depressed that he failed to save his sister’s life that he is slow to recover. Vosch, the camp's commander, comes to see Ben and gives him a reason to continue the fight. Ben joins a squad and trains to be a soldier. He wants to go out and kill the aliens who destroyed his family. As he trains, Ben meets a five year old boy who is scared of everything. The little boy is convinced that his sister is coming to save him.

As Ben’s training ends and he is sent on his first mission, Cassie and Evan set out to save Sammy from the military base. One of Ben’s soldiers, a girl called Ringer, convinces him that the soldiers at the base, including Vosch, have been lying to them. When Ben and Ringer discover a sniper who was shooting at them is really their drill sergeant, Ben believes her. Ben tries to convince the other soldiers and only succeeds when one of them accidentally kills himself with a drill sergeant's device. However, Ben refuses to leave Sammy behind at the base and insists on going back.

Cassie sneaks onto the base and manages to make her way to a bunker where Sammy is being held. As she attempts to escape with him, they run into Ben. Ben agrees to join them even though he is weary of trusting anyone. On their way to safety, they run into Vosch. Vosch threatens to kill Sammy, but Evan has gotten onto the base and sabotage Vosch’s systems. Evan helps Cassie, Ben, and Sammy escape, but stays behind to destroy the base. With the help of Ben’s squad, Cassie, Ben, and Sammy survive.