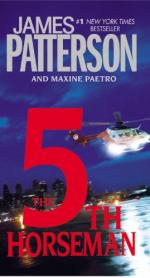 James Patterson
This Study Guide consists of approximately 30 pages of chapter summaries, quotes, character analysis, themes, and more - everything you need to sharpen your knowledge of The 5th Horseman.

The 5th Horseman: A Novel Summary & Study Guide includes comprehensive information and analysis to help you understand the book. This study guide contains the following sections:

This detailed literature summary also contains Topics for Discussion on The 5th Horseman: A Novel by James Patterson.

Lieutenant Lindsay Boxer is the main character in The 5th Horseman by James Patterson and Maxine Paetro. This book is the fifth in a series written on the Women's Murder Club. Lindsay is in her mid-thirties, slender with blonde hair. She works in homicide at the San Francisco Police Department. Lindsay is also a founding member of the Women's Murder Club along with ME Claire Washburn, reporter Cindy Thomas and attorney Yuki Castellano. Lindsay is involved in a long distance relationship with Joe Molinari, Deputy Director of Homeland Security. Lindsay lives with a rescued border collie named Martha. Lindsay's best friend is Claire, to whom she refers as "Butterfly."

Having been recently promoted to Lieutenant, Lindsay is often confused and unhappy with her role as supervisor. She prefers to be on the streets. Lindsay often works the streets with her former partner Warren Jacobi and his partner, Rich Conklin. Lindsay is a tireless worker who takes her work to heart and will keep on going to the point of collapse.

The story begins with an interaction between the Night Walker and a young patient named Jessie Falk. It moves on to introduce Lindsay Boxer and other members of the Women's Murder Club, a group of women who have come together during various murder cases, using their knowledge and resources to help Lindsay capture criminals.

The chapters vary between the lives of the women and murder cases which include the Car Girl murders plus the murders that take place at San Francisco Municipal Hospital. One of those victims is Keiko Castellano, Yuki's mother. Yuki enlists the aid of her friends to find out the real reason her mother has died.

Lindsay is called to the scene of several murders involving young women who have been murdered and then posed in expensive cars seemingly chosen at random. Each woman has been dressed in very expensive clothing from Nordstrom's. The case is puzzling until it is learned that the clothes are the link - one of the killers is an employee at Nordstrom's and has stolen the clothes to dress his dead models. Lindsay captures the killer and watches helplessly as his accomplice jumps out of a window.

Tied into the strange murders at Municipal Hospital is a court case against Municipal which involves a malpractice suit filed on behalf of twenty plaintiffs whose family members died at the hospital due to medication errors or perhaps outright murders. The ER doctor, Dennis Garza, working in conjunction with the prosecutor, flubs his testimony so that the hospital loses. The doctor and the prosecutor, who are lovers, will split the $18 million reward she will receive for the victory. However, the getaway plan is foiled when an outraged father of a dead patient confronts Garza. Garza kills the man and then attempts to get away, only to be stopped by Lindsay.

The Night Walker, the murderer of Keiko and other patients, is caught after transferring to an Atlanta hospital.

More summaries and resources for teaching or studying The 5th Horseman: A Novel.

The 5th Horseman: A Novel from BookRags. (c)2022 BookRags, Inc. All rights reserved.