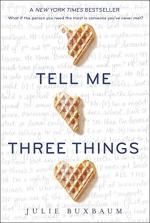 Buxbaum, Julie
This Study Guide consists of approximately 50 pages of chapter summaries, quotes, character analysis, themes, and more - everything you need to sharpen your knowledge of Tell Me Three Things.

This detailed literature summary also contains Quotes and a Free Quiz on Tell Me Three Things by Buxbaum, Julie.

The following version of this book was used to create the guide: Buxbaum, Julie. Tell Me Three Things. First Ember Edition, 2017.

Buxbaum’s novel is divided into 34 chapters of varying lengths, mostly in chronological order, which detail Jessie Holmes’s first few months at Wood Valley High School, a private school in the San Fernando Valley. The novel takes place in the first-person perspective, with Jessie as the protagonist and narrator.

The novel begins 733 days after Jessie’s mom died. Jessie receives an anonymous email from Somebody Nobody, or SN, offering to guide her through the travails of going to a new school in a different city. Jessie initially declines, resolving to fend for herself. She recalls the first day of school again to try to discern SN’s identity, but resigns herself to the fact that it could be any of her classmates. Two weeks later, in the present, Jessie encounters a boy named Ethan while trying to find a place to eat. Ethan is reading a book by Jean-Paul Sartre and ignoring the advances of a group of girls who try to invite him to a party. She goes outside and begins eating alone, texting her friend in Chicago, Scarlett, about how different the girls in LA are to those in Chicago.

The English teacher, Mrs. Pollack, assigns the class a partner project about The Waste Land by T.S. Eliot, and Ethan ends up asking Jessie to partner with him. He tells her that he will do the entire project himself, and that she should not worry because he will get them an A. Scarlett urges Jessie via text to accept SN’s offer of guidance, so Jessie sends him an email with a few questions. He suggests befriending a girl named Adrianna Sanchez, and tells her that most families at Wood Valley are very rich.

Later on at home, Jessie's father tells the new family that he got a job at a pharmacy in a grocery store, causing Theo, Jessie's stepbrother, to storm out in anger and embarrassment. Jessie and Theo talk later and reconcile somewhat, beginning to get to know one another better. Jessie and SN continue their online exchanges, with Jessie opening up about how unhappy she is. Back in school, Jessie befriends Adrianna, or Dri. She later talks to Ethan and refuses to let him do all the work, citing that she is smart and capable and that it would be against the honor code. He agrees to work together with her, and formally introduces himself. In gym class, Dri, Jessie, and Dri's friend Agnes watch two class bullies, Gem and Crystal, during gym class and bond over their mutual dislike for them.

Jessie begins to look for a job and finds one at a bookstore run by the mother of a senior at Wood Valley named Liam. Liam is a member of a band called Orgasmville comprised of Wood Valley students including Ethan. Jessie and Ethan begin to work on the project together after school, and Dri reveals her crush on Liam to Jessie. Liam invites them to a party where his band will be playing, and Jessie and Dri agree to go. Jessie begins to develop a crush on Ethan during their work sessions together, and likewise continues to develop a relationship with SN.

One night at home, Jessie hears her father and Rachel fighting in their room. She and Theo commiserate over the fight and continue to bond over their similar situations. The next night Jessie talks to her father about the move and, while still angry with him, realizes he is having difficulty adjusting too. The day of the party finally arrives, and SN messages Jessie telling her she looks beautiful. She tries to identify him from the guests at the party and thinks he must be Caleb, a boy whom she had previously met on her first day. She also learns that Gem and Liam are dating, and Gem tells Jessie to stay away from him after he greets her enthusiastically.

At home the next day, Jessie and her father have a fight over breakfast during which Jessie accuses him of leaving her out of the decision to move. She tells SN where she works, and Caleb later appears during her shift at the bookstore, leading her to believe conclusively that Caleb is SN. She asks him out for coffee, and Caleb agrees. In English class, Gem trips Jessie, causing her to fall. Mrs. Pollack holds Jessie back after class to talk about it, revealing that Gem's father is a major donor, and draws Jessie's ire by asking her what she did to deserve Gem's anger toward her. As she walks out to her car, Liam approaches her but Jessie brushes him off, telling him that Gem can explain to him why she is upset. She texts Scarlett, asking if she can live on her couch in Chicago.

About a week later, Jessie and her father still have not made up from their fight. Jessie makes a date at a community service day at school for Thursday to get coffee with Caleb. Gem tries to bully Jessie again, but Theo defends her, indicating their growing closeness. Later on at home, Rachel tells Jessie that she bought her a plane ticket back to Chicago for the weekend as a way to help her cope with her homesickness. On Thursday, Caleb approaches Jessie and cancels their date, saying he does not think it is a good idea because Liam, his friend, broke up with Gem because he likes her. Jessie returns to Chicago the next day, and spends the weekend at Scarlett's house.

Jessie finds Scarlett acting chilly toward her, and after getting drunk with a few other friends in Scarlett's basement discovers it is because Jessie never asked how Scarlett was after Jessie moved to California. SN also messages Jessie and thinks they should finally meet in person. The two make up and spend the rest of the weekend happy together and trying to figure out who SN is.

Theo picks Jessie up from the airport upon her return, and demands to know about her and Liam. Jessie reveals that she is not interested in him and does not know why he broke up with Gem. Theo warns her about Ethan, saying he has been depressed since his brother died. Jessie wonders if Ethan is SN, and SN sets the time for their meeting as Wednesday after school.

Jessie and her father eventually meet at the bookstore and reconcile after their long silence. She likewise makes up with Mrs. Pollack, who reveals that she too was bullied in school and therefore was not sure how best to be supportive. Jessie returns home to find Rachel in her bedroom again, and the two recognize the inherent difficulty in their relationship but resolve to make it work. Wednesday arrives, and Jessie goes to IHOP, the designated meeting spot with SN. Liam first arrives, making Jessie believe that he is SN, and asks her out. Ethan and Caleb arrive shortly thereafter, however, and Ethan reveals that he is SN. Caleb and Liam leave, and the novel concludes with Jessie and Ethan talking in the booth for hours and finally kissing.

More summaries and resources for teaching or studying Tell Me Three Things.