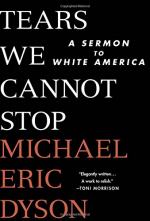 Michael Eric Dyson
This Study Guide consists of approximately 40 pages of chapter summaries, quotes, character analysis, themes, and more - everything you need to sharpen your knowledge of Tears We Cannot Stop.

Tears We Cannot Stop: A Sermon to White America Summary & Study Guide includes comprehensive information and analysis to help you understand the book. This study guide contains the following sections:

This detailed literature summary also contains Topics for Discussion on Tears We Cannot Stop: A Sermon to White America by Michael Eric Dyson.

The book is written in the first person, as though the author is leading a worship service in a Christian church. While he frequently addresses God in prayer and invocation, for much of the book the author addresses the reader directly, referring to him / her as “beloved,” in the same way as a pastor in a Christian church might address a congregation. A note on racial terminology: the term “black” is used throughout this analysis as a response to the term “black” being used by the author throughout the book; the use of “African American” is quite limited. Also, the author makes frequent, and pointed, use of the term “nigger” in his writing, hence, its inclusion in this analysis.

The first four chapters of the book form what might be described as a series of prologues, introductory writings that, like the introductory components of a Christian church service, are essentially prologues to the main focus of the event – the sermon, or a less on on the interpretation of the Word of God. Those four prologues consist of a “Call to Worship” (i.e. an invitation calling on the reader / congregation to be mentally and physically present in the event); “Hymns of Praise” (i.e. songs created and presented as witnesses to the spiritual truth of the event); and “Invocation” (i.e. a call on God to be present during the event). The final prologue is headed “Scripture Reading,” or a reading from a sacred text. In an actual Christian church service, that text would be the Bible. In this variation on the format of such a service, the text consists of writings by equal rights activist the Reverend Martin Luther King Junior.

With Chapter 5, the author enters the main focus and purpose of the book - his sermon to white people. In Christian churches, a sermon usually consists of a minister interpreting the Word and ways of God for the congregation. In this book, the sermon consists of the author (i.e. minister) interpreting the words and ways (and history, and fears) of black people for his intended congregation of white readers.

The sermon is constructed in two sections. The first, “Repenting of Whiteness,” offers three commentaries on what the author, and by extension many black people in America, sees as the primary source of tension between the white and black communities. That source, he says, is “whiteness,” a term he uses to describe not skin pigmentation so much as a psychological, moral, economic, cultural, and political state of being that essentially proclaims, espouses, and promotes the essential superiority of the white race. In this section of the sermon, the author also discusses various ways in which white people struggle when faced with the essential truths of the racial situation in America, and also struggle to NOT face those truths. In the sermon’s second section, “Being Black in America,” the author turns his focus to a detailed exploration and commentary of what might be described as blackness, or the various ways in which black people are discriminated against, and at times, act against their own best interests.

In the sixth chapter, the author offers guidance about the various actions white people can take to redress or transform the current situation. He uses the acronym “R.E.S.P.O.N.S.I.V.E.” as a template from which he offers his very specific suggestions. In the book’s final three chapters, the author gives an example of how offerings of reconciliation and reparation can be both made and met openly and with respectful discourse. He suggests that the election of Donald Trump to the Presidency of the United States is an urgent “Call to Service” that both whites and blacks must heed if American society is to survive. In the final chapter, the author offers a prayer to God for guidance, support, strength, and courage.

More summaries and resources for teaching or studying Tears We Cannot Stop: A Sermon to White America.