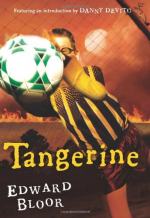 Edward Bloor
This Study Guide consists of approximately 33 pages of chapter summaries, quotes, character analysis, themes, and more - everything you need to sharpen your knowledge of Tangerine.

This detailed literature summary also contains Topics for Discussion and a Free Quiz on Tangerine by Edward Bloor.

Paul Fisher is twelve years old when his family moves from Houston to Tangerine County, Florida, where his father is to be a civil engineer for the county. Paul's father and brother, Erik, have already gone to Florida, leaving Paul and his mother to make the drive alone. As they leave, Paul has a scene at the edge of his memory but can't quite pull it up. Paul enrolls in the Lake Windsor Middle School where he tries out for the soccer team. But when the coach discovers that Paul is legally blind, he removes him from the team despite Paul's obvious ability.

The family soon realizes that the housing development where they are to attend is not perfect due to mistakes in the county's civil engineering department. There are also problems at the school, and when several of the portable buildings used for classrooms fall into a sinkhole, Paul has the change to transfer to another school - Tangerine Middle School. He manages to avoid telling them that he is legally blind and is accepted as a member of the soccer team. Meanwhile, Paul's father is wrapped up in what Paul calls the Erik Fisher Football Dream. Everything revolves around Erik's football schedule and Paul's father never attends a soccer game. But Erik is a cruel bully and when he benefits from the death of a fellow football team member, Paul hears him laughing in the back yard.

One day Paul has friends over to work on a science project and Erik makes fun of them, going so far as to hit a boy named Tino in the face. Paul can't bring himself to tell on Erik but a few days later he is watching when Tino's brother, Luis, confronts Erik at the football field. Erik's friend hits Luis in the head with a blackjack and a few days later, Luis dies. It's also discovered that Erik and his friend have been burglarizing houses in the neighborhood - a fact Paul's mother discovers. Paul finally comes forward with the information of the assault against Luis as well. When Paul's grandparents learn of the situation, Grandpop says that it's because Erik wasn't punished when he hurt Paul's eyes.

Meanwhile, Paul is struggling to recall a childhood memory. He catches glimpses of it occasionally but one night he suddenly remembers, when he was five and the family lived in another city, Erik and a friend sprayed paint in Paul's eyes as retribution because they thought he'd told on them for spray painting a wall. With Paul's memory, the family is no longer able to ignore Erik's cruelty.

More summaries and resources for teaching or studying Tangerine.