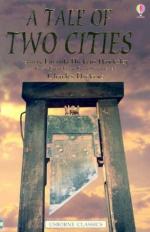 Introduction & Overview of A Tale of Two Cities

Charles Dickens
This Study Guide consists of approximately 70 pages of chapter summaries, quotes, character analysis, themes, and more - everything you need to sharpen your knowledge of A Tale of Two Cities.

A Tale of Two Cities Summary & Study Guide includes comprehensive information and analysis to help you understand the book. This study guide contains the following sections:

This detailed literature summary also contains Bibliography and a Free Quiz on A Tale of Two Cities by Charles Dickens.

A Tale of Two Cities occupies a central place in the canon of Charles Dickens's works. TIns novel of the French Revolution was originally serialized in the author's own periodical All the Year Round Weekly publication of chapters 1-3 of Book 1 began on April 30, 1859. In an innovative move, Dickens simultaneously released installments of the novel on a monthly basis, beginning with all of Book 1 in June and concluding with the last eight chapters of Book 3 in December. Dickens took advantage of the novel's senal publication to experiment with characterization, plot, and theme. He described the work in a letter to his friend John Forster, cited in Ruth Glancy's A Tale of Two Cities: Dickens's Revolutionary Novel, as "a picturesque story rising in every chapter, with characters true to nature, but whom the story should express more than they should express themselves by dialogue." The novel that emerged from his experimentation is now regarded as one of Dickens's most popular and most innovative works.

Dickens's work was very popular with the reading public when it was first published. One review in the magazine Athenaeum stated that A Tale of Two Cities had attracted the praise of a hundred thousand readers On the other hand, a whole set of critics, most notably Sir James Fitzjames Stephen writing in Saturday Review, criticized the novel precisely for its popularity. "Most of the critics writing in the intellectual and literary journals of the day considered popular success a good reason to condemn a work," explains Glancy. "If the public liked it, they certainly could not be seen to approve of it at all" Modern critical opinion, however, has given the novel an important place among Dickens's most mature works of fiction.

A Tale of Two Cities from Gale. ©2005-2006 Thomson Gale, a part of the Thomson Corporation. All rights reserved.