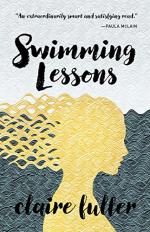 Claire Fuller
This Study Guide consists of approximately 95 pages of chapter summaries, quotes, character analysis, themes, and more - everything you need to sharpen your knowledge of Swimming Lessons.

This detailed literature summary also contains Quotes and a Free Quiz on Swimming Lessons: A Novel by Claire Fuller.

The following version of this book was used to create the guide: Fuller, Claire. Swimming Lessons. House of Anansi Press, 2017.

Gil, an elderly author, thinks he sees his long-lost wife, Ingrid, while browsing the bookshop in Hadleigh one stormy day. He follows her to the promenade above the beach but slips and falls. Nan, Gil’s eldest daughter telephones Flora, Gil’s youngest daughter, to inform her of their father’s accident. Flora has spent the last few days sleeping with Richard, a bookshop assistant, who loans Flora his car upon hearing about her father.

Interspersed throughout the novel are Ingrid’s letters to Gil about their marriage. The letters are written over the course of June 1992, the month before she disappears. In her first letter, Ingrid describes how she and Gil met in university. They leave notes with each other’s bicycles. Ingrid leaves Gil a paper daffodil. In her first creative writing class, Gil, Ingrid’s professor, tells a fictional story about the paper daffodil and asks his students to share an equally private story.

As Flora returns to Spanish Green, Gil’s home town, she drives through a shower of flying mackerel. Flora skids to a stop, shocked by the falling fish and finds she cannot restart Richard’s car again. With Richard’s car broken, Flora walks the rest of the way home. In her next letter to Gil, Ingrid explains that she has decided not to mail Gil her letters, but rather store them in his books. Ingrid describes her university tutorial with Gil and a few other students. Gil explains that each reader interprets a text differently.

As Flora walks back to the Swimming Pavilion, her childhood home, she thinks about her first sexual experience with a boy named Cooper. She approaches the Swimming Pavilion and wonders whether Ingrid will be waiting for her there. In her next letter, Ingrid visits Gil’s office to discuss the book he lent her. Gil explains that he only wanted Ingrid to read the book’s marginalia. The next time Ingrid meets Gil to discuss her writing assignment, he takes her to a café and tries to kiss her.

Flora enters the house and remembers Gil telling her to strike a balance between hope and grief after Ingrid disappeared. Inside the Swimming Pavilion, Flora tries on the dress Ingrid wore the day she disappeared. In her next letter, Ingrid writes about finding the letter Gil wrote professing his love to Ingrid and prophesizing their future together. Ingrid’s best friend, Louise, warns her to stay away from Gil. Gil spots Ingrid in the street one day and, after they talk at a bar, invites her to a party.

Flora repairs Richard’s car in Hadleigh and follows a woman that looks like Ingrid to the library. Richard finds her there, and they return to the Swimming Pavilion. Nan and Gil join them shortly thereafter. In her next letter, Ingrid tells the story of Gil’s party. Gil’s best friend, Jonathan, warns Ingrid against Gil, but she ignores his advice. Ingrid and Gil begin a passionate romance. At the end of the summer, Ingrid realizes she is pregnant.

At breakfast, Gil tells his daughters and Richard his theories about interpretation but admits that he has begun to believe reality is better than imagination. In her next letter, Ingrid tells Gil she is pregnant, and he asks her to marry him. They travel to America but cannot afford the trip. Ingrid and Gil get married. Gil loses his job at the university and Ingrid gets kicked out of school.

At the beach, Flora tells Richard that Ingrid was a strong swimmer. She asks why Richard sticks around the Swimming Pavilion when they barely know each other, and Richard leaves, upset. In her next letter, Ingrid gives birth to Nan and feels no connection to her daughter. Ingrid takes Nan to London to visit Louise. When Ingrid returns home, she finds Gil performing oral sex on another woman in his writing room.

Nan tells Gil that she cannot find the book he was holding during his accident. Gil asks Richard to burn all his books. Flora finds Richard and Nan taking apart Gil’s bed. Flora throws a tantrum, and Nan tells her that Gil is dying of cancer. In Ingrid’s next letter, Gil gives her the dress she wears before her disappearance to apologize for cheating. Ingrid considers leaving Gil. Jonathan visits, and Ingrid tells him about a Norwegian ritual for finding drowned bodies. Ingrid becomes pregnant again but miscarries.

Gil asks Flora to find him a single blue baby boot. Nan reveals that Gil has invited Jonathan and Louise to visit. In Ingrid’s next letter, Gil sells a short story and takes Ingrid to Florence. He cheats on her again with a prostitute. Ingrid learns she is pregnant again. Just before she writes her next letter, Ingrid swims naked. Afterwards, Ingrid retrieves the greatcoat she wore down to the beach from a man who nearly rapes her.

While Flora takes care of Gil, he imagines seeing Ingrid in the bathroom. Flora tells Richard about her childhood friend Kathy, explaining that after Ingrid disappeared, Flora wanted to spend all her time at Kathy’s house. In her next letter, Ingrid finally feels a connection to her unborn child, but he is still born two months early. She remembers when Gil slaps her after Flora runs away. Flora misremembers the same incident where she ran away.

Richard tells Gil he cannot burn the books. In her next letter, Ingrid swims in Little Sea Pond and nearly drowns. She helps Gil write A Man of Pleasure, his most famous novel. While Nan is away, Flora takes Gil on a rowboat with a cockerel. Nan finally tells Flora that Gil frequently cheated on Ingrid. Nan leaves to calm down, and Flora sends Richard after her. Jonathan, Louise, and Gabriel, Flora’s and Nan’s half-brother, arrive at the Swimming Pavilion.

In her next letter, Ingrid visits Gil’s television interview for A Man of Pleasure. She learns that he cheated on her again and asks Louise to help her abort their next child. Ingrid tells the story about the first time she and Flora met Gabriel at the Swimming Pavilion. Gil sent his son away. Ingrid learns that Gil dedicated A Man of Pleasure to Louise. Ingrid writes about having sex with Jonathan in a hotel.

Gil asks to throw a party in his room. Gil burns down the Swimming Pavilion, himself in it, while everyone is away. Ingrid writes her final letter to Gil, asking him to take care of their daughters and her garden. Gil’s death is ruled an open verdict. Nan buys Flora a record player, and they dance to a song that they once danced to with Ingrid. Richard and Flora visit the nudist beach, and Flora buries the toy soldier she found where Gil fell, saying a prayer for Ingrid. In the present, a woman resembling both Ingrid and Flora looks out over the rooftops of Spanish Green.

More summaries and resources for teaching or studying Swimming Lessons: A Novel.