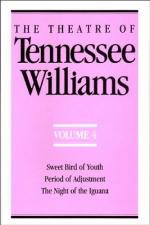 Tennessee Williams
This Study Guide consists of approximately 56 pages of chapter summaries, quotes, character analysis, themes, and more - everything you need to sharpen your knowledge of Sweet Bird of Youth.

This detailed literature summary also contains Bibliography and a Free Quiz on Sweet Bird of Youth by Tennessee Williams.

Though Tennessee Williams's Sweet Bird of Youth (1959) was his biggest box office success since Cat on a Hot Tin Roof (1955), the play came to be regarded as an example of the playwright in decline. It was his second-to-last big success. Even before it opened on March 10, 1959, at the Martin Beck Theatre on Broadway, Sweet Bird of Youth had $390,000 in advance sales. The original production closed January 30, 1960, after 375 performances.

When the play opened, the frank depictions of various corruptions were considered somewhat shocking. Touching on familiar themes for Williams (including lost youth and aging, loneliness, sex, and pretending to be what one is not), Sweet Bird of Youth was inspired in part by his own life, though not autobiographical. Williams had written at least eight versions of the play. One version was published in Esquire and another, with only two characters (Chance and the Princess), was performed in Miami, Florida, in 1956.

From the earliest Broadway production of Sweet Bird of Youth, critics disagreed about the play. While some saw it as another example of Williams's prowess with language and character, others found it disjointed, disorganized, and distasteful. Critical opinion generally declined over time, though scholars were interested in how the play fit in with the rest of Williams's career.

Writing about a 1975 revival of the play, Edwin Wilson of the Wall Street Journal wrote

Sweet Bird of Youth is not considered on a par with Mr. Williams's best work, but it has its share of his power and magic both in the characters he has created and in the music of his words. No other writer of the American theater offers the lyricism Mr. Williams does, and it can be heard here. . . .

More summaries and resources for teaching or studying Sweet Bird of Youth.

Sweet Bird of Youth from Gale. ©2005-2006 Thomson Gale, a part of the Thomson Corporation. All rights reserved.