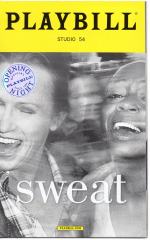 Related Topics
Ruined
Crumbs From the Table of Joy

Lynn Nottage
This Study Guide consists of approximately 52 pages of chapter summaries, quotes, character analysis, themes, and more - everything you need to sharpen your knowledge of Sweat.

The following version of this play was used to create this study guide: Nottage, Lynn, Sweat, Theatre Communications Group, 2007. The play premiered at Oregon Shakespeare Festival on July 29, 2015 under the direction of Kate Whoriskey.

Sweat is set in Reading, Pennsylvania and fluctuates in time between 2000 and 2008.

The play opens on September 29, 2008 with Jason and his parole officer, Evan. As they go about their conversations, it becomes clear that Jason is avoiding Evan’s questions. After much prying, he finally opens up to his parole officer regarding a recent encounter with Chris. At the mention of this event, the scene shifts. Now Evan sits with Chris, sharing a similar dialogue. However, Chris is more willing to communicate with Evan. By the end of the first scene, Chris also mentions that he saw Jason recently. There is a heavy air of mystery surrounding the significance of this event, as well as the two ex-convicts relationship to each other.

Scene Two takes place eight years prior in 2000. Cynthia, Tracey, and Jessie are drunk at the local bar celebrating Tracey’s birthday. Stan and Oscar, the bar employees, are also present. Stan is actively involved in the ladies’ conversation, whereas Oscar is consistently overlooked by the group. Stan, Tracey, and Cynthia share town gossip and recent developments at Olstead’s plant. The audience learns that the plant is hiring a manager and might be promoting one of the floor employees. Cynthia voices her interest in the job. Tracey is reluctant, but decides to apply as well.

Scene Three takes place with Jason and Chris at the bar. The audience learns that Tracey is Jason’s mother. The boys talk with Stan about their financial struggles and working at Olstead’s. Chris shares that he is interested in going to college to be a teacher. Jason quickly dismisses Chris’s dream, yet is upset that his friend did not share these plans sooner.

Scene Four opens with Brucie (Cynthia’s unemployed, addict husband) at the bar. Brucie is chatting with Stan when Cynthia, Tracey and Jessie enter. There is immediate hostility in the room. Cynthia has not seen Brucie since he stole from her over the holidays. The couple becomes confrontational, but ultimately Brucie is apologetic for his actions. Cynthia cannot reconsider a relationship with him until he is off the drugs and employed again.

Scene Five opens after the record setting stock market drop of 2000. Tracey and Oscar share a cigarette outside the bar. Cynthia has received the promotion and the gang is celebrating inside. Tracey is annoyed by all of this and it shows in her actions. Her conversation with Oscar is laced with sarcasm and criticism. Oscar discloses vital information: Olstead’s plant is hiring non-union workers. There was a flyer displayed at the local Latino Community Center. Tracey is upset by this news, and tells Oscar not to apply for the job.

Scene Six occurs at a time when Reading is $10 billion in debt. Jessie sits alone with Stan at the bar. It is her birthday and her friends are late to the celebration. Jessie tells Stan that Tracey has been spreading rumors that Cynthia was only promoted because she was black. Eventually Cynthia, Jason, and Chris join Jessie at the bar. Tracey arrives much later and there is tension from Cynthia when she enters. They get into an argument and Tracey asks if Cynthia has heard of the recent changes in Olstead’s employment. She then shows Cynthia the flyer that Oscar had presented earlier.

Scene Seven takes place just outside the bar. Jason and Chris are rushing to the plant when they run into Brucie. Brucie asks the boys where they are going; Olstead’s has moved out three of the factory machines and posted a list of names on the door. They are hurrying over there to see what has happened. Brucie advises the boys not to strike against Olstead’s but rather to take a pay cut when the time comes.

Act Two begins in 2008. Jason is visiting his mother at her apartment after recently being released from prison. He asks to borrow money, but Tracey only has five dollars to lend him. Jason notices that his mother is high. The scene shifts to Cynthia’s house; Chris is seeing his mom for the first time since prison. They discuss recent changes and how Chris has found religion to be helpful. The two share an uncomfortable conversation about the past.

Act Two, Scene Two is back at the bar in July of 2000. Chris, Jason, Jessie, and Tracey are all yelling at Cynthia. They want answers about Olstead’s plans for layoffs. Cynthia finally succumbs to the peer pressure and tells her friends that they will be asking employees to take a 60% pay cut in order to stay. The floor workers announce their plans to fight back and strike with the union.

The following scene features Cynthia at the bar alone on her birthday. She makes small talk with Stan, when Jessie and Tracey enter. There is hostility that grows in the room. Cynthia’s friends blame her for the recent cuts at Olstead’s. Tracey then shares a story about her relationship with Cynthia from years ago, and ends by asking her friend to fight management with them. Cynthia says that she will not be leaving her new job to help the union strike.

Act Two, Scene Four finds Brucie at the bar with Jason and Chris. Brucie has been heavy into the drugs again. Chris talks with his dad about this, when the conversation turns to changes at Olstead’s. Brucie tells the boys to take the concessions rather than strike. Brucie has been out of work for nearly two years due to a similar situation. It is not worth the fight.

A month later, Stan confronts Oscar at the bar. Oscar has taken a job at Olstead’s. Stan believes this will cause him trouble and advises him against accepting the position. Oscar does not agree with Stan’s opinion and plans to work at the plant. Tracey enters the bar and becomes aggressive toward Oscar for the exact reason Stan had warned him. This is a very personal situation.

Tensions escalate in the following scene. Jason, Chris, Jessie, and Tracey are at the bar when Oscar enters. They are upset with Oscar for crossing the picketing line and working the floor at Olstead’s. Just as Oscar is about to leave, Jason blocks his way. Stan and Chris attempt to defuse the situation to no avail. A fight ensues, and all of the men are involved. Amidst the chaos, Jason accidentally hits Stan in the head with a baseball bat. Stan falls to the floor with severe injuries.

Act Two, Scene Seven takes place in October of 2008. Chris and Jason are in separate, yet parallel meetings, with Evan. Both of the boys discuss the incident in the bar and their feelings on the tragic event. In the final scene of the play, Jason and Chris end up at the bar. Oscar is the bartender and is immediately cautious about their presence. As the three men take in this awkward encounter, Stan enters the bar. He is unable to effectively form words and moves very slowly around the room due to his injury. They all share an uncomfortable moment in each others’ presence as the play comes to a close.

More summaries and resources for teaching or studying Sweat: Play.