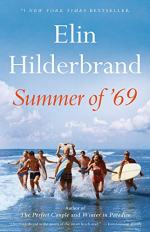 Elin Hilderbrand
This Study Guide consists of approximately 86 pages of chapter summaries, quotes, character analysis, themes, and more - everything you need to sharpen your knowledge of Summer of '69.

Summer of '69 Summary & Study Guide includes comprehensive information and analysis to help you understand the book. This study guide contains the following sections:

This detailed literature summary also contains Quotes and a Free Quiz on Summer of '69 by Elin Hilderbrand.

The following version of the novel was used to create this study guide: Hilderbrand, Elin. Summer of ’69. Little, Brown and Company, June 18, 2019. Kindle.

In Summer of ’69, a historical novel by Elin Hilderbrand, nothing is the same for the Levin/Foley family after Richard “Tiger” Foley is drafted to fight in the Vietnam War. Even summer at All’s Fair, the Nantucket home belonging to family matriarch Exalta Nichols, suffers. The family must learn to adjust to the changes or be destroyed.

Between the deployment of Jessica “Jessie” Levin’s brother Tiger and the yearly trek to Nantucket, Jessie did not have much of a celebration for her 13th birthday. She is surprised when her generally prickly grandmother, Exalta, gives her a necklace that was given to Exalta by her late husband on their first anniversary. In a fit of anger later in the summer, Jessie steals this necklace from her grandmother’s room where Exalta had been keeping it for her to wear to a dinner. Jessie loses the necklace and faces the horror of having to tell her grandmother the truth. Despite her fear, Jessie demonstrates her maturity and tells her grandmother what happened.

Jessie’s mother Katharine “Kate” Levin turns to drinking to handle the stress of Tiger’s deployment as well as the resurrection of a secret Kate has kept to herself for years. Hoping to get Tiger sent home early from war, Kate makes an arrangement with Mr. Crimmins, the groundskeeper for All’s Fair, that he and his grandson, Pick, can stay in the smaller house on the property for the summer if Mr. Crimmins will use his influence to help get Tiger home. Kate is haunted not only by the knowledge that Pick is the illegitimate son of her first husband, Wilder Foley, but also of a darker secret concerning Wilder’s death that Mr. Crimmins has kept for years.

Kate’s oldest daughter, Blair Foley Whalen, believes her husband, Angus, is cheating on her. When Blair admits her suspicions to Joey Whalen, a former boyfriend and Angus’ brother, and the two are caught in a compromising position by Angus. Even though Blair is pregnant with his twins, Angus orders Blair to spend the rest of the summer on Nantucket, away from him. Already resentful of Angus because he made her quit her job when they were married, Blair leaves. She wonders if Angus will take her back so their children will have a father.

Kate’s next oldest daughter, Katharine “Kirby” Foley, has earned a reputation for herself as being a wild child. She has been arrested twice for marching in anti-war rallies. What Kirby’s parents do not know is that she was arrested by the same policeman who was having an affair with Kirby. Kirby wound up pregnant only to learn that the man was married and not interested in leaving his wife for Kirby. Needing a fresh start, Kirby begged her parents’ permission to live and work on nearby Martha’s Vineyard. While there, Kirby came close to Senator Ted Kennedy and the car crash that killed Mary Jo Kopechne, a real-life tragedy incorporated into the novel.

Things come to a head for Kate when her husband, David Levin, suggests that they buy their own home on Nantucket. He does not like living with Exalta under her rules. David also criticizes Kate for the amount of alcohol she is drinking. He refuses to come and visit because Kate is always drunk. Hoping to appease David, Kate goes to look at the house he had found for sale. Kate is surprised to discover that the house is just what the family needs and buys it.

The novel closes as Kate surprises the family at Thanksgiving by taking them to their own house on Nantucket. Kate feels as if the house is a symbol of a fresh start for the family. Blair and Angus have reunited after Angus admitted that he was not having an affair but seeing a psychoanalyst for his depression. Additionally, Kate received a letter from Tiger telling her that Tiger loved being a soldier and that she should be proud that she raised a hero. Even though he was offered a transfer to requisitions, an offer he felt was given him because of Kate or Exalta’s influence, he did not want to be moved away from the fighting.

More summaries and resources for teaching or studying Summer of '69.