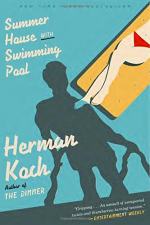 Koch, Herman
This Study Guide consists of approximately 45 pages of chapter summaries, quotes, character analysis, themes, and more - everything you need to sharpen your knowledge of Summer House with Swimming Pool.

This detailed literature summary also contains Quotes and a Free Quiz on Summer House with Swimming Pool by Koch, Herman .

The following version of this novel was used to create this study guide: Koch, Herman. Summer House With Swimming Pool. Translated from the Dutch by Sam Garrett. Hogarth, 2014. Hardcover.

Dr. Marc Schlosser is a family doctor in the Netherlands. Working a limited number of hours each week, his clientele has mostly become upper-class artists and other creatives -- people who Marc internally detests, while projecting an outward attitude of pleasant patience. Marc is currently under examination from the Board of Medical Examiners due to the suspicious death of his patient Ralph Meier, a famous actor who had a large and commanding personality. Shortly after Ralph’s death, as Marc is seeing patients, his office is invaded by Ralph’s widow, Judith, who shouts and knocks over furniture. Marc has his assistant clear the day’s appointment while he looks to console Judith privately.

18 months earlier, Marc had been invited by Ralph to see him perform the lead role in a Shakespeare play. Marc’s wife, Caroline, uncharacteristically wants to tag along to the play, and is charmed by his performance. After the play, while drinking champagne in the lobby, Marc is appalled by Ralph’s obvious look of lust towards Caroline. However, Marc also makes meaningful eye contact with Judith, and wants to seduce her himself. The Meiers invite the Schlossers to a family barbecue: the Schlossers’ two daughters Lisa (11 years old) and Julia (13 years old) enjoy playing with the Meiers’ two sons, Thomas (younger) and Alex (older). Later, when the Schlossers plan their own family camping trip, Marc intentionally books a camping ground near to the Meiers’ summer home (at an unknown European location outside of the Netherlands). Lisa and Julia run into Alex and Thomas on the beach and, despite Caroline’s misgivings, they move their tent from the campground to the Meiers’ backyard. The Meiers are also vacationing with Judith’s mother, Vera, a famous Dutch director named Stanley Forbes, and his significantly younger girlfriend, Emmanuelle.

Marc and Caroline both become subtly irritated as they vacation with the Meiers, in part because Ralph commands the agenda of each day with his commanding personality. After many days when they are unable to find a private moment alone, they go to a café together on a Friday, and agree they will leave the home on the upcoming Monday. Marc helps Lisa tend to a small, injured bird they find. The next day, with all of the other adults on an errand and the four kids playing by the pool, Marc and Judith begin to passionately kiss in the house’s kitchen. Marc suddenly stops when he believes he sees somebody in the kitchen doorway watching them, but he cannot confirm if someone was there.

The rest of the adults return, and Ralph reveals to his sons that he had purchased and hid fireworks for that day’s holiday. Caroline, Vera, and Emmanuelle stay behind at the house as everyone else goes to the crowded beach to set off fireworks. Marc and Stanley drive together, taking backroads. When they are side-swiped by a mysterious car, Stanley insists on tracking the car down, and he rams the car himself. When they arrive at the beach, Marc is upset that Ralph has already given permission for Lisa and Judith to wander off by themselves. After setting off many fireworks, Marc, Ralph, and Stanley go to a bar by the beach. They are approached by three attractive young women, who are flirtatious -- however, Ralph begins to inappropriately fondle one of them. This instigates a fight, and Marc prevents Ralph from hitting the girls by kicking Ralph in the knee and knocking him off-balance. Shortly after the fight breaks up, Marc saves one of the other three women by giving her mouth-to-mouth.

Marc finds Judith, and becomes increasingly irritated as he is still unable to find Julia. Finally he finds her: apparently unconscious, surrounded by people on the beach. As Marc looks at her, it is clear to him that she has been raped. Everyone returns to the house, as Marc and Caroline carefully tend to Julia, who says she cannot remember what happened. The parents discuss taking Julia to the police or to the hospital, but decide that those experiences may ultimately be more traumatic for Julia. Marc tries to take in as many details as shrewdly as possible, noting that he did not know where Stanley or Ralph were as he saved the life of the other woman. As the sun begins to rise, Ralph brings Marc a glass of whiskey, and Marc intensely questions him, making Ralph angry. The Schlossers leave a few hours later, and quietly stay in a rural hotel.

When Marc returns home, he begins to effectively sabotage his own business, and begins losing patients as he treats them rudely. Ralph comes in unannounced, telling Marc about a worrying bump near his groin. Marc tells Ralph he will take a tissue sample, but what Marc in fact does is release the cancerous growth into Ralph’s bloodstream, knowing it will kill Ralph. Marc and Judith then begin an affair.

The next summer, the Schlossers decide to vacation to America, taking along an increasingly introverted Julia. Upon returning home, Marc looks through pictures Lisa had taken on the trip, and discovers a number of pictures from the previous summer: they are pictures that Stanley has taken, with Julia and Lisa as models. Marc confronts Stanley over the phone, but Stanley says they were innocent, and has even posted similar pictures on his website. On the site, Marc sees pictures of the rental agency’s repair man alongside his daughters.

As Ralph is on his deathbed, he tells Marc when he had heard from his son Alex about the incident: Julia had faked her unconsciousness and amnesia, and had in fact been raped by the rental agency repair man. Minutes after Ralph passes away, Marc tells Judith that they should no longer see each other. A few days later, Marc receives a call in his office from his old professor, Aaron Herzl: Herzl has seen Marc’s file regarding his treatment of Ralph, and Herzl advises Marc to flee the country. At this moment, Judith comes storming into his office. Marc lies to Judith about how he had treated Ralph, and that his death was accidental and/or coincidental. Marc takes his family on vacation to Santa Barbara, California, where Stanley and Emmanuelle live, and they conduct a more formal photo shoot with Julia, on Stanley’s advice that it could lead to a modeling career.

More summaries and resources for teaching or studying Summer House with Swimming Pool.