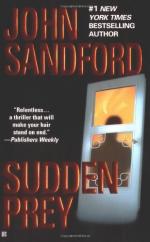 John Sandford
This Study Guide consists of approximately 28 pages of chapter summaries, quotes, character analysis, themes, and more - everything you need to sharpen your knowledge of Sudden Prey.

This detailed literature summary also contains Topics for Discussion and a Free Quiz on Sudden Prey by John Sandford.

In a suspenseful tale of crime, revenge and punishment, author John Sandford introduces an array of characters, conflicts, and emotions, as he leads the reader through intricate and treacherous incidents and events. Lucas Davenport has, along with fellow police officers, participated in an attempted capture of two female bank robbers, an event that ends with the deaths of both women in a shootout on the bank steps. The women are the wife and sister of convicted felon Dick LaChaise, who, enraged by this incident, plots his prison escape and revenge. With the assistance of two crazed friends and the involuntary help of his wife's sister, Sandy Darling, LaChaise embarks upon a crime spree intended to kill loved ones of all officers involved in the bank robbery killings, following the Biblical "eye for an eye" approach. Following two successful murders and the wounding of another officer's wife, Lucas Davenport quickly discerns the killers' motivations and begins his frantic efforts to provide for the safety of all potential victims, including his fiance Weather. His efforts are jeopardized throughout by the actions of a corrupt colleague, who keeps the killers apprised of police activity and who, at the same time, plots the deaths of the criminals in order to avoid detection. Davenport is continually frustrated as he attempts to analyze and predict the next movements of LaChaise and secure the identity of the traitor within their midst. Woven into this plot are serious contemporary issues of crime and punishment, to include insanity as a cause of criminal activity, the efficacy of rehabilitation of violent criminals, law enforcement's willingness to "bend" the rules in pursuit of criminals, and a criminal justice system that may, indeed, make mistakes in its zeal to gain convictions.

Fatal human flaws emerge as undercurrents in the work. In the characters of LaChaise, Butters, and Martin, the reader sees obsession, impulsivity, and wholesale rage, emotional states that can result in nothing less than their own deaths, which, ultimately, they accept as a natural consequence of both their actions and the "system" which they loathe. Greed and amorality, depicted in the corrupt police officer Andy Stadic, cause actions that are both despicable and predictors of his own destruction, much like that of a tragic hero in a Shakespearean play. Despite the successful murders of two officers' family members, justice is served in perhaps the most efficient manner, with the deaths of the criminals and the vindication of Sandy Darling, who may now return to her former peaceful life. Davenport and fiance surgeon Weather at least temporarily resolve their somewhat conflicting beliefs about the relative value of human life, and the tale ends predictably.

More summaries and resources for teaching or studying Sudden Prey.