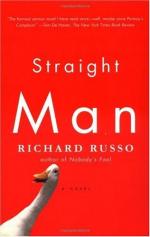 Richard Russo
This Study Guide consists of approximately 33 pages of chapter summaries, quotes, character analysis, themes, and more - everything you need to sharpen your knowledge of Straight Man.

This detailed literature summary also contains Topics for Discussion and a Free Quiz on Straight Man by Richard Russo.

William Henry Devereaux Jr. is an exasperating man, going through an exasperating time in his life. Railton College, in Pennsylvania is where Devereaux is the temporary chairman of the English Department. Budgetary constraints have made it very tense on campus, within all the departments. Rumors abound that the Dean is having all the chairs draw up lists of the staff that is expendable. Devereaux thinks that the rumors are normal. April always brings fear of downsizing, but with a new computer center being built on campus, Hank truly believes that the funding will come through.

The only child of academic parents, Devereaux has followed in their footsteps. Married to Lily, a teacher at the local high school, day to day life is passed in the halls of the local college. A published author like his father before him, Hank runs the English department with a sense of sarcasm and dry humor, as it's not something he wants and wants to make sure that all those around him know it. When a television crew is on campus for the groundbreaking at the new computer center, Devereaux takes the opportunity to take a stand and demand answers about the budget. Standing beside the lake in a fake nose and glasses, he holds a goose by the throat, threatening to kill a duck a day until his department has a budget. The resulting uproar among colleagues and friends convinces some that Devereaux is crazy and others that he is a hero. When ducks start dying, Hank is even more of a hero to the masses, though he is not the one killing fowl.

Throughout the novel, Hank is troubled by problems urinating, a fact his doctor thinks might be in his head; but Hank disagrees, as kidney stones run in the family. Hank is afraid that many things run in the family, including infidelity. His father had left he and his mother years earlier and had spent his life leaving one woman for another. Now, forty years later, his father has returned, something that Hank's mother feels is vindication. Hank feels, perhaps strangely, nothing at all.

Hank is forced to face his past and his current life at the same time, and by having to deal with both at the same time, he is overwhelmed. Realizing that he isn't happy is a shock to him. Hank had been traveling the same road for so long, he was unaware that there was another path to follow, or that he might want to leave the road he was on.

Discovering that changes are not the dreaded things that he thought, Hank embraces his life for what it is and becomes a happier man. His wife Lily is also happy, as she has the man she married back. She had been worried about Hank, fearing he had become lost somewhere along the way. The death of his father is a relief to Hank and his mother. They are finally finished with a very long chapter of their lives, and the unresolved issues that had been created so long ago.

More summaries and resources for teaching or studying Straight Man.