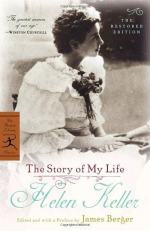 Introduction & Overview of The Story of My Life

Helen Keller
This Study Guide consists of approximately 62 pages of chapter summaries, quotes, character analysis, themes, and more - everything you need to sharpen your knowledge of The Story of My Life.

The Story of My Life Summary & Study Guide Description

The Story of My Life Summary & Study Guide includes comprehensive information and analysis to help you understand the book. This study guide contains the following sections:

This detailed literature summary also contains Bibliography and a Free Quiz on The Story of My Life by Helen Keller.

Helen Keller overcame the seemingly insurmountable obstacles of deafness and blindness to become an influential lecturer and social activist. Keller has become, in American culture, an icon of perseverance, respected and honored by readers, historians, and activists. When she was a child, Keller received a letter from a writer that she quoted in her autobiography: "Some day you will write a great story out of your own head, that will be a comfort and help to many." This statement proved prophetic, as her autobiography The Story of My Life, published in the United States in 1903, is still read today for its ability to motivate and reassure readers. In her time, Keller was a celebrity and the publication of her autobiography was met with enthusiasm. The book was generally well received, and Keller later wrote a follow-up called Midstream, My Later Life in which she tells what happened in the twenty-five years after the publication of The Story of My Life.

Keller began working on The Story of My Life while she was a student at Radcliffe College, and it was first published in installments in Ladies' Home Journal. Helping her was an editor and Harvard professor named John Albert Macy, who later married Keller's first teacher and lifelong companion, Anne Sullivan. In the book Keller recounts the first twenty-two years of her life, from the events of the illness in her early childhood that left her blind and deaf through her second year at Radcliffe College. Prominent historical figures wander among the pages of The Story of My Life: She meets Alexander Graham Bell when she is only six and remains friends with him for years; she visits the acclaimed American poet John Greenleaf Whittier; and she exchanges correspondence with people like Oliver Wendell Holmes and Mrs. Grover Cleveland.

More summaries and resources for teaching or studying The Story of My Life.

The Story of My Life from Gale. ©2005-2006 Thomson Gale, a part of the Thomson Corporation. All rights reserved.