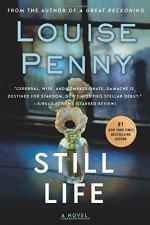 Related Topics
The Beautiful Mystery
A Fatal Grace
How the Light Gets In
Louise Penny
The Long Way Home
A Better Man
Kingdom of the Blind: A Chief Inspector Gamache Novel
All the Devils Are Here
The Madness of Crowds
State of Terror

Louise Penny
This Study Guide consists of approximately 65 pages of chapter summaries, quotes, character analysis, themes, and more - everything you need to sharpen your knowledge of Still Life.

The following version of this book was used to create the guide: Penny, Louise. Still Life. St. Martin’s Paperbacks, 2005.

Jane Neal’s body is discovered in the woods of her home town, Three Pines. Jane was an ex-school teacher and well-liked and respected in her town. Chief Inspector Armand Gamache of the Sûreté is in charge of the investigation and on seeing a small puncture wound in Jane’s chest, he determines this is an unnatural death. The wound is determined to be caused by a wooden arrow. Three Pines is a popular spot for hunting so initially it is believed this could be a hunting accident. He interviews Ben Hadley, the man who found the body and a close personal friend of Jane’s. Ben claims no one would have murdered Jane as she was loved by everyone.

Gamache finds out from Jane’s best friend and neighbor, Clara Marrow, that just before Jane died she submitted her painting Fair Day to be shown at the Arts Williamsburg opening. He finds this interesting as Jane had never shown her art to anyone before. He is also suspicious of the death of one of Jane’s friends, Timmer, who died a few weeks before of cancer. He realizes that Fair Day was painted at the same time of Timmer’s death. He becomes curious as to why Jane never let anyone into her house beyond her kitchen during her lifetime. He is unable to go into Jane’s house as Jane’s estranged niece, Yolande Fontaine, forbids it.

During the investigation, Gamache along with his second in command, Jean Guy Beauvoir, and rookie detective Yvette Nichol, interview Matthew Croft at his home. Matthew and his wife look very anxious during their interview and Gamache determines they are hiding something in the basement. On searching the basement, they find an arrow head with Jane’s blood on it and a bow that was about to be burnt in the furnace. Gamache believes that Matthew’s son Phillipe accidentally shot Jane however on interviewing Philippe he accuses his father of murdering Jane and tells Gamache he helped cover it up. Gamache doesn’t believe him however he is ordered to arrest Matthew. Gamache refuses and is suspended and Beauvoir is put in charge.

During a ceremony in the woods where Jane was killed, Clara discovers an arrow in a nearby tree. Gamache and Beauvoir determine that this was the arrow Philippe shot but that he mistook the arrow in Jane’s body for his and panicked. Philippe admits to it and Gamache is put back in charge of the investigation. The investigation is now considered a murder allowing Gamache to enter Jane’s house.

On entering Jane’s house, the detectives find it covered in tacky wallpaper and the floorboards painted pink. Initially they do not understand why Jane would have been so secretive about her house until they realize Yolande had covered the walls and floors. Underneath they discover Jane had drawn the people of the town all over her house. Yolande had covered it up because she was ashamed of Jane’s artwork. Clara finds Jane’s more recent will and discovers Jane’s house was left to her and not Yolande. She and her husband Peter and Ben work on uncovering Jane’s art.

On the night of the art opening, Clara holds a party at Jane’s house. The townspeople are in awe of Jane’s pictures on her walls. From looking at the walls and then at Fair Day, Clara recognizes that one of the faces in the painting has been scrubbed out and replaced. Gamache concludes that the killer must have done this. Clara and Gamache both realize that the killer must be the person missing from Fair Day- Ben Hadley.

Ben kidnaps Clara but is knocked unconscious on running into a wall. He is arrested and admits to killing Jane and Timmer. Gamache tells Clara and her friends that Ben killed his mother, Timmer, as she was going to write him out of her will. He then believed Jane knew he had killed Timmer as she had painted him in Fair Day when he was supposed to have been out of town that day, the day Timmer had died.

More summaries and resources for teaching or studying Still Life.