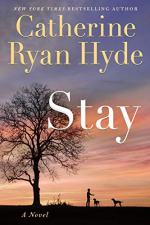 Catherine Ryan Hyde
This Study Guide consists of approximately 55 pages of chapter summaries, quotes, character analysis, themes, and more - everything you need to sharpen your knowledge of Stay.

Chapter 1 is set in 1969. The narrator, identified as Lucas Painter, is fourteen. He describes a particular day in his life as one that acts like a fulcrum, a teeter-tooter, changing the rest of his life.

On that day, Lucas received a letter from his brother, Roy, who was fighting in the Vietnam War. Roy’s letter, in which he described something he saw that badly disturbed him, was so heavily redacted that Lucas could not understand what Roy was trying to describe.

Downstairs, Lucas’ parents were fighting, just like always. He jumped when one of them threw and broke something. He was suddenly frustrated and believed the noise was why he could not understand Roy’s letter. He took the letter with him to visit his best friend, Connor.

Pauline Barnes, Connor’s mother, opened the door when Lucas knocked, but she never...

More summaries and resources for teaching or studying Stay.