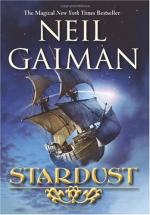 Plot Summary
+Chapters Summary and Analysis
Chapter 1, In Which We Learn of the Village of Wall, and of the Curious Thing That Occurs There Every Nine Years
Chapter 2, In Which Tristran Thorn Grows to Manhood and Makes a Rash Promise
Chapter 3, In Which We Encounter Several Other Persons, Many of Them Still Alive, With an Interest in the Fate of the Fallen Star
Chapter 4, Can I Get There by Candlelight?
Chapter 5, In Which There is Much Fighting for the Crown
Chapter 6, What the Tree Said
Chapter 7, At the Sign of the Chariot
Chapter 8, Which Treats of Castles in the Air, and Other Matters
Chapter 9, Which Deals Chiefly With the Events at Diggory's Dyke
Chapter 10, Stardust
Epologue, In Which Several Endings May Be Discerned
Free Quiz
Characters
Objects/Places
Themes
Style
Quotes
Topics for Discussion
Order our Stardust Study Guide

Neil Gaiman
This Study Guide consists of approximately 38 pages of chapter summaries, quotes, character analysis, themes, and more - everything you need to sharpen your knowledge of Stardust.

This detailed literature summary also contains Topics for Discussion and a Free Quiz on Stardust by Neil Gaiman.

Tristran Thorn begins a wondrous journey into the land of Faerie, looking for a fallen star to win the hand of his love, Victoria Forrester. Though no one is allowed outside the wall that borders Wall, Tristran is granted passage due to he unusual circumstances of his birth. The product of a chance meeting between his father and the slave of a witch, Tristran had been delivered to Wall in a basket eighteen years ago. In love with Victoria Forester, Tristran promises to retrieve a fallen star in order to win her hand. Tristran travels to Faerie, meeting many magical characters and creatures on his quest.

In Faerie, Tristran first meets a small hairy man named Charmed, evidently because the word is written on the case he carries. Charmed had met Tristran's father Dunstan many years ago, the same year Dunstan had made love to Tristran's mother at the Faerie Market. Charmed helps Tristran in learning the ways of Faerie and provides him with a candle that allows him to travel through the land quickly. The candle brings Tristran to the glade where the star had fallen, and Tristran is startled to discover that the star is a woman. The star is not at all pleased to find that Tristran has come to bring her back through the Wall as a gift for the young woman he loves.

Elsewhere in Faerie, The eighty-first Lord of Stormhold lays dying and must decide which of his three living sons will take command. Four of his sons are dead, at the hands of their brothers, and their ghosts are present, discussing which of the brothers will finally succeed their father. The Lord throws the topaz that is the Power of Stormhold from the window, and tells his three living sons that whoever claims it will be the eighty-second Lord. The topaz is what knocked the star from the sky, causing her to fall and break her leg, and the star is required to carry the topaz with her until the rightful owner claims it.

Three witches also have an interest in the star, seeking her heart in order to regain their youth and strength. The Lilam, or witch-queen, sends their oldest sister to find the star, giving her the remaining youth they have from a star's heart they had taken many years ago. The oldest travels Faerie, seeking the star, but each time she uses magic, her youth wanes, until she is finally older and weaker than she has ever been.

Tristran and the star travel through Faerie on the way to the Wall, meeting with danger along the way, as well as very helpful citizens of Faerie. Their relationship changes when Tristran releases the chain that binds the star to him, and then he saves her life during a meeting with the witch queen. The star is now bound to him, though it is doubtful that she would have left him anyway.

Arriving at the Faerie Market outside of Wall, Tristran returns to his village to find that Victoria Forester has given her heart to another. Though she has promised her hand to Robert Monday, Victoria tells Tristran that she will honor her promise to him if he wishes. Tristran is pleased to allow her to marry Monday and returns to his star happily.

The slave of the witch witch has been released from her bonds after sixty years of service. The slave is in reality the Lady Una, firstborn child of the eighty-first Lord of Stormhold. Tristran retrieves the topaz from the star and claims his rightful place as the eighty-second lord. Lady Una returns to Stormhold as regent until Tristran and the star return to rule eight years later, after wandering Faerie happily for many years.

Tristran dies many years later, and the star continues to rule Stormhold, climbing the tallest tower late at night to be as close as possible to her mother the moon and her sister stars.

More summaries and resources for teaching or studying Stardust.