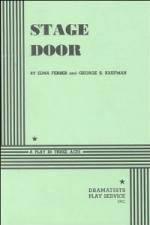 George S. Kaufman
This Study Guide consists of approximately 25 pages of chapter summaries, quotes, character analysis, themes, and more - everything you need to sharpen your knowledge of Stage Door..

"Stage Door" by George S. Kaufman and Edna Ferber is the story of a group of young girls who live together in a big house in New York City called "The Floodlights Club." It is a house for young women from other cities and states who come to New York City with stars in their eyes. The women do not live in the best conditions. The big old house is run down and overly crowded. They each must put up with three girls per cramped bedroom while paying a relatively high rent for 1936. They sacrifice comfort and security just so they can be near enough to Broadway to audition for the opportunity to get a role, often just a walk on or a bit part.

The first act opens on the main room of the old house. The scene depicts the utter chaos in which the girls at the Floodlights Club live. One girl, Olga, practices the piano incessantly no matter who is talking or who is coming and going. She plays at the Wintergarden and she is focused on honing her art to perfection. Big Mary and Little Mary come home after a long, exhaustive day beating their feet on the sidewalks of New York, trying but failing to get in to see an agent or entertainment manager.

This is 1936 and there is only one telephone in the entire house. It is ringing constantly since there are over a dozen girls who live in the house in addition to Mrs. Orcutt, the house matron, and two servants, Mattie and Frank. The traffic of exiting and entering girls is disruptive and seemingly unending. Some girls eat dinner but others must hurry and get ready for their dinner dates. Almost like a sorority house, the girls exchange clothes and fix each other up on blind dates. Then it's time for the gentlemen callers to begin arriving. The doorbell rings and Mattie calls upstairs for a girl who comes down to leave. The doorbell rings again and the cycle continues.

Terry Randall and Jean Maitland are roommates and good friends. They are the featured characters in "Stage Door." Although their goals are ostensibly the same at the beginning of the story, their careers go in vastly different directions. Terry is dedicated to acting on the stage. That is all she wants and nothing else will do. As the story, progresses, Terry means what she says. The offer of marriage and even film stardom does not lure her away from her dream.

On the other hand, Jean is rather easily swayed. When she has the chance to go to Hollywood to make films, she doesn't hesitate. She decided she didn't want to be a starving artist. She'd take her chances in Hollywood. As it turned out, Jean became a big successful movie star. Although Terry had the same opportunity, she did not regret remaining in New York. She was happy for Jean but acting in films wasn't for her.

Terry's boyfriend, Keith, also went Hollywood. He was a playwright who looked down on writing for pictures. But the money and the fame was too much for him to resist. When Keith returns to New York and proposes to Terry and asks her to return to Hollywood with him, she turns him down. She stays in New York where she is eventually able to star in a Broadway play and she finds a man who loves her and who supports her in her aspiration to be a stage actress.

More summaries and resources for teaching or studying Stage Door..