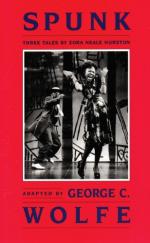 1887: Eatonville was incorporated as an allblack, self-governing community. It provided residents an opportunity to live normal lives without daily struggles with racism. African- American culture thrived without competition.

1990s: In America's "melting pot," many ethnic groups feel that their distinct cultures are being absorbed and erased because young people are exposed every day to many different cultural influences. Some neighborhoods and communities have established special classes, clubs, and charter schools to preserve and protect their cultural heritage.

1925: Women in the United States had had the right to vote for only five years, and they had few rights in terms of marriage and divorce, employment protection, or property ownership. Most married women, with or without children, were not employed outside the home.

1990s: Women have few legal impediments to full involvement in the political and economic life of the United States. Most childless women have...