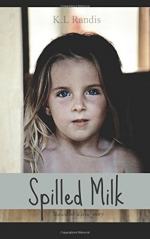 Spilled Milk: Based on a True Story Summary & Study Guide

K.L Randis
This Study Guide consists of approximately 53 pages of chapter summaries, quotes, character analysis, themes, and more - everything you need to sharpen your knowledge of Spilled Milk.

Spilled Milk: Based on a True Story Summary & Study Guide includes comprehensive information and analysis to help you understand the book. This study guide contains the following sections:

This detailed literature summary also contains Quotes and a Free Quiz on Spilled Milk: Based on a True Story by K.L Randis.

In the novel Spilled Milk by K.L. Randis, it was when a young boy, Joseph, spilled his glass of milk and his father did not become enraged or beat the boy that Brooke Nolan realized that her family was not normal. Brooke was eating dinner with her boyfriend’s family and was already impressed by the way they discussed their day and joked with one another over dinner instead of bickering and hitting when the milk was spilled. Accustomed to protecting her younger siblings when they made mistakes, Brooke jumped to see to it that Joseph was not physically hurt. Brooke could tell by the looks she got from Joseph’s parents that she was the one acting strangely.

When she was six years old, Brooke remembered watching her father, David, save her brother’s life after he almost drowned. Brooke thought her father was a hero for having saved Adam’s life. He asked her not to tell her mother what happened and Brooke assumed it was because her mother would be disappointed she did not get to see David’s heroics. Brooke notes this was the first of many secrets that David asked her to keep for him.

As Brooke got older, her father began hurting her sexually during their bedtime routine. Molly, Brooke’s mother, had herniated and ruptured seven discs in her back at work, causing her to be unable to be physically active in her children’s lives. Brooke remembered that one day after David finished with her, he moved to her little sister, Kat. Brooke kicked Kat awake to make her cry and interrupt what David was doing. Brooke glared at her father indicating that she planned to protect her sister from him. It became an understanding that Brooke would allow her father to hurt her as long as he did not touch Kat.

Tired of being hurt, Brooke decided when she was eleven that she and her sister would run away and live at their grandparents’ house. When Molly learned what her daughters had planned, she persuaded Brooke to stay by telling her that if things did not improve they would all run away together. Just a few weeks later, Molly disappointed Brooke when she announced the entire family was moving to Pennsylvania, hours away from their other family members. Brooke recognized at that point that her mother had never been serious about her plans to run away. When Brooke was twelve, she had to have emergency surgery to remove her appendix. Before she was fully recovered, her father raped her.

Despite her abuse, Brooke excelled in school. She got a telemarketing job when she was only in the ninth grade. In addition to helping her mother out around the house and taking care of her brothers and sisters, Brooke was a member of the cheerleading squad and had a boyfriend, Paul. It was while she was eating dinner at Paul’s house that Brooke experienced the pivotal moment with the spilled glass of milk that made her realize what she was experiencing was not normal or acceptable.

With the help of Paul’s mother, Gina, a counselor, and a concerned aunt and uncle, Brooke reported to the police that her father had raped her. The first trial ended in a mistrial because one juror felt that important information had not been addressed. The second trial ended with David being found guilty of 21 charges including rape, incest, and endangering the welfare of a child. Brooke became a community advocate with the Women in Crisis Center in order to help other abused children.

More summaries and resources for teaching or studying Spilled Milk: Based on a True Story.

Spilled Milk: Based on a True Story from BookRags. (c)2022 BookRags, Inc. All rights reserved.