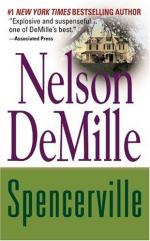 Nelson Demille
This Study Guide consists of approximately 29 pages of chapter summaries, quotes, character analysis, themes, and more - everything you need to sharpen your knowledge of Spencerville.

This detailed literature summary also contains Topics for Discussion and a Free Quiz on Spencerville by Nelson Demille.

Spencerville is a novel by bestselling writer Nelson Demille. In this novel, Keith Landry has been forced to retire after twenty-five years as an intelligence expert in the Army. Keith has returned to his hometown, Spencerville, in hopes of recovering his pride and perhaps reconnecting with old friends. One of these old friends is Annie Baxter, wife of the town police chief and ex-lover to Keith. Things become complicated as Annie and Keith renew their relationship under the watchful eye of Annie's controlling and abusive husband. Spencerville is a novel that pushes the boundaries of social convention and shows just how far one man can go for the woman he loves.

Keith Landry drives to his family's farm in Spencerville, Ohio within days of being forced to resign from the Army and his job with the National Security Council. Although his parents and his siblings are all in different states enjoying their own lives, Keith has chosen to return to the small town where he grew up, a town he feels has not really seen in more than twenty years despite frequent trips home. Keith finds himself thinking of Annie Baxter, his college lover, as he returns to town, aware that she still lives there with her husband.

Keith is unaware that Annie's life has become a prison. Annie's husband, Cliff Baxter, is the police chief, and he uses his resources to keep her a prisoner in her own home out of fear that she will take a lover behind his back. Annie has never cheated on her husband, but when she learns Keith has returned to town, the idea of an affair becomes a possibility. Annie does not go out of her way to see Keith, but a chance meeting in town reminds them both of the unfinished business left between them.

Keith reunites with other friends in Spencerville, including a couple from college who were anti-war activist during Vietnam even as Keith found himself drafted into the same war. This couple, Jeffery and Gail Porter, are unhappy with the control Chief Baxter has over the town and they are plotting to push him out of office. This includes a public meeting that exposes all of Baxter's illegal acts, including forcing young women to become his lovers.

As the town is pushed into a growing atmosphere of tension, Keith and Annie reunite and become lovers once more. Keith and Annie plan to run away together, but before they can meet at the appointed time, Keith finds himself forced to return to Washington, DC. Unable to return in time due to a storm, Keith misses his meeting with Annie. However, Annie comes to him the following day and they take that moment to make their move.

Within hours of Annie and Keith leaving Spencerville, Chief Baxter issues a state wide APB for them. Unable to fly out of state and with their car listed on the APB, Keith and Annie hide up in a hotel. Unfortunately, they are unaware that Chief Baxter placed a tracking device on Keith's car. They are quickly found. Baxter beats Keith, leaving him for dead, and kidnaps Annie. Keith wakes a couple of days later in an unfamiliar hospital. Aware that he is most likely still wanted for kidnapping, Keith sneaks out the door.

Keith traces Annie and her husband to a cabin in Michigan. With the help of an old high school buddy, Keith makes the trip to the cabin and stakes it out, trying to find a vulnerable moment to attack Baxter without placing Annie in harm's way. The moment comes and Keith manages to get into the house under the distraction of his high school buddy's death. A fight ensues in the dark. Annie manages to get free and she kills her husband by slamming a fireplace poker into his head. Keith and Annie escape, leaving Keith's old spy buddies to clean up the mess.

More summaries and resources for teaching or studying Spencerville.