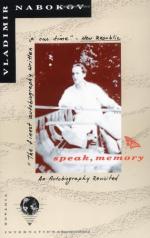 Vladimir Nabokov
This Study Guide consists of approximately 24 pages of chapter summaries, quotes, character analysis, themes, and more - everything you need to sharpen your knowledge of Speak, Memory.

Speak, Memory is divided into 15 chapters that follow Nabokov’s life chronologically through his early adulthood. Much of the book is spent defining the golden years of his opulent childhood—years that Nabokov has many times described as “perfect.” In the initial chapters Nabokov notes in list-like fashion significant family members, teachers, tutors and governesses from his childhood and through the chronological list breaks off in tangential asides that lead to stories and moments remembered.

It seems Nabokov is discovering what is happening as he writes and has not constructed thought, memory or story before sitting down at the page. Throughout the book the reader gets a sense that someone is prodding Nabokov, asking questions to further his stories, to encourage him to more acutely remember details—initially it can be assumed that he is metaphorically speaking to Mnemosyne, the goddess of memory, but towards the end of the book he begins using the pronoun “you” and it is revealed that this is Vera, his wife and whom he has dedicated the book to. She is his Mnemosyne.

The last third of the autobiography takes place after Nabokov’s family’s exile from Russia. He must leave behind the city manse and country estate that he loves so much because of his father’s liberal politics during the Russian Civil War. It is when he leaves Russia for England, and then later Berlin and Paris, that he realizes he loves Russia. No matter where Nabokov lives, or how many other democratic, noble-class Russians he meets, he still does not feel part of this group of émigrés. The Russia that Nabokov knows and remembers is one where he experiences an elite wealth and sheltered entitlement. As an adult in exile he spends his time butterfly hunting, composing chess problems, writing novels and teaching language classes. He enjoys his simple life with his wife and his small son, but he always longs for the Russia of his childhood. He does not go back because he knows that that Russia is gone.

More summaries and resources for teaching or studying Speak, Memory: An Autobiography Revisited.