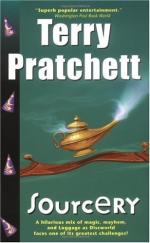 Terry Pratchett
This Study Guide consists of approximately 24 pages of chapter summaries, quotes, character analysis, themes, and more - everything you need to sharpen your knowledge of Sourcery.

This detailed literature summary also contains Topics for Discussion and a Free Quiz on Sourcery by Terry Pratchett.

Sourcery by Terry Pratchett is the story of the wizards that live on Discworld and the struggle that ensues when a new sourcerer shows up. Rincewind, a most inept wizard and coward, will travel the world and face unimaginable odds, against his wishes, in order to save the dirty streets of Ankh-Morpork.

Wizardry is for men, and sourcery is for the gods and so sourcery has long been banned since it will destroy the world if used. Ipslore the Red was the eighth son of a wizard. He became a wizard and had an eighth son as well. The eighth son, a wizard squared and so a sourcerer, was only a baby when Death, the skeleton that shows up when you are close to death, came for Ipslore. Ipslore captures himself in his staff to cheat Death and leaves the staff for his son, naming his son Coin. Death allows this because to destroy the staff and claim Ipslore's soul would be to kill Coin, and Death can't change destiny in that way since each man has his time.

Many years later the Archchancellor of the Unseen University, leader of the wizards, is due to be selected, and receive the Archchancellor's hat. Rincewind, librarian assistant and least of wizards, notices that something isn't right but can't convince the other wizards of it. The Archchancellor's hat, being powerful in itself, calls for a thief to come and steal him away so that he won't be put on the head of the sourcerer that the hat knows is coming.

The sourcerer, Coin, is a boy of about ten years old. He challenges one of the older wizards to a duel. Coin is able to kill him in a single stroke of magic and demands to be made Archchancellor. There are some of the wizards that are uncomfortable about this but all are too scared to say anything, since the boy's magic is so strong.

In a bar in Ankh-Morpork, Rincewind is having a drink when a young woman, Conina, a thief, approaches Rincewind and produces the Archchancellor's hat. The hat is able to communicate with sourcerers telepathically and orders Rincewind to help them, not realizing what an incapable wizard Rincewind is. While retreating they are attacked on the boat and the hat is captured. When they get to Al Khali , Conina and Rincewind are captured, luckily, by the same men that have the hat. The leader of these men is Creosote.

The wizards have become easily swayed by Coin and his power and decide they will take over the world since they will be better suited for ruling than normal men. They start to kill and use great magic that is flowing from Coin. The trouble with magic is that it will also change the very fabric of the universe and can be dangerous. One of the wizards sees that Coin is in a room at a later time and that he is curled up crying while the staff is looking over him. The staff follows the wizard, and before he has a chance to tell anyone, kills him.

The wizards have Ankh-Morpork under their control and head to the other cities of Discworld. The wizards make it to Al Khali and Rincewind, Conina, Creosote, and a incompetent barbarian named Nijel flee out of the city then try and decide what to do. Rincewind makes his way back to the Unseen University, and Conina, Nijel and Creosote take a magic lamp and force the unwilling genie to take them to Ankh-Morpork. The young sourcerer, Coin, has done away with the gods of Discworld not realizing that this will start the apocalypse, being the end of the world.

Rincewind decides he can't stop the sourcerer with magic and puts a half brick in a sock and begins to swing it wildly over his head. He gets on his magic carpet and flies to the top of the sourcerer's tower. The little boy is shocked that the man holds only a sock and a brick. The boy begins to argue with the staff, and a battle between the two ensues with the staff attacking the little boy. Rincewind alone tries to help. They boy destroys the staff, and Death appears to take Ipslore the Red's soul as Death takes everyone eventually. Rincewind and Coin are able to stop the apocalypse and let the gods have Discworld back. In the struggle to save Discworld, Rincewind is caught somewhere in another dimension and is unable to return. Things return to normal. Coin is still a source of great power, which is still dangerous on Discworld and so he makes a world all his own and disappears into it. Conina and Nijel leave together to live happily ever after, and the librarian keeps what is left of Rincewind's hat knowing that a wizard will always return for his hat.

More summaries and resources for teaching or studying Sourcery.