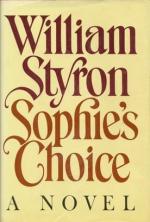 William Styron
This Study Guide consists of approximately 80 pages of chapter summaries, quotes, character analysis, themes, and more - everything you need to sharpen your knowledge of Sophie's Choice.

Sophie's Choice tells the story of three young friends who lived in Brooklyn in 1947. Stingo, the narrator, is a Southern boy, born and bred, who moved to New York with the ambition of becoming a writer. His stifling nine-to-five job at a publishing company kills his spirit and his hopes, and the young man quickly becomes jaded. Worst of all, he cannot write; he is blocked. All that changes when Stingo is fired and moves into a boarding house in a Jewish neighborhood in Brooklyn. There, he meets his fellow tenants, Nathan Landau and Sophie Zawistowski, a volatile but fascinating young couple. Thrilled to be in the company of people his age, Stingo begins to enjoy life again, and finds new inspiration for his writing. But Nathan's unpredictable temper quickly becomes a fly in the ointment. Nathan can be charming one moment and deadly the next. Both Stingo and Sophie deny that there is a problem with Nathan. After each one of his violent blow-outs, they both forgive him and resume their happy little trio. As Stingo, who is secretly in love with Sophie, is pulled further and further into this lover's triangle, he becomes Sophie's confidant when things are going badly with Nathan.

Stingo gets to know Sophie better, and she tells him about the time she spent at Auschwitz during the war. Sophie is Polish and eventually admits to Stingo that her family was extremely anti-Semitic, something she has tried to hide from Nathan. She hides a lot from Nathan, who needs little excuse to hit her. She does not tell him that after her husband was killed, she took a lover from the Polish Resistance - a man who stood for everything her Nazi-loving father hated. Nor does she tell him how she tried to seduce the SS Commandant at Auschwitz in order to save her little boy's life. Sophie hates herself and speaks frequently of suicide. Stingo cannot understand why, since he does not judge her for the horrible choices she had to make at Auschwitz. But Sophie has not revealed all her dark secrets yet.

Meanwhile, Nathan is rapidly losing control. What Stingo first thought was just a bad temper, he later learns from Nathan's brother, is actually a severe mental problem, and in fact, most of what Nathan has told Stingo are lies. Nathan pretends to be a research scientist, although he really just has a low-paying, clerical job in a lab, which his brother had to pull strings to get for him. Whenever Nathan's paranoia and jealousy sets him off on a violent rage, he gets high on amphetamines and ebulliently announces a great new scientific breakthrough. These grand announcements usually spell trouble for Stingo and Sophie, because they are lies Nathan tells with the intention of putting his friends off-balance emotionally so that his rage, when it hits, comes as a surprise.

While Nathan continues his downward spiral into homicidal and suicidal rage, Sophie and Stingo cling desperately to their shared friendship. They both care deeply about Nathan, and on his good days, he is a warm, generous, and magnificently entertaining man. Sophie's suicidal tendencies grow greater as Nathan's temper degenerates, and Stingo lives in constant fear of losing one, or both, of his friends. When Nathan is calm, the friendship remains vibrant, fun, and alive. The three of them enjoy music together, and Nathan gives Stingo enthusiastically supportive advice about his novel-in-progress. Whenever Nathan gets tough with Stingo, Stingo tolerates it because he respects Nathan's opinion, even when Nathan is calling him a Southern racist. Stingo, like Sophie, comes from a racist family, and is struggling with the demons of slavery's legacy.

At the same time Nathan's temper finally rounds the bend to complete insanity, Sophie feels her death is near, and makes what amounts to a death-bed confession to Stingo. She reveals that on the day she arrived at Auschwitz, the SS officer made her choose which one of her two children would live. She gave up her daughter to the gas chambers, and that is why she feels she does not deserve to live. By now, Nathan has threatened both Stingo and Sophie's lives with a gun, and Stingo flees with his beloved Sophie, intending to return to the South and marry her. His dreams seem fulfilled in their hotel room that night, when Sophie makes passionate love to him. When he awakes, she has gone back to Nathan, a choice that ensures her death. By the time Stingo returns to Brooklyn, he finds them together, dead, in the room they shared. This novel is Stingo's attempt to increase human awareness of tragedy by sharing his story of friendship-gone-bad and love undone.

More summaries and resources for teaching or studying Sophie's Choice.