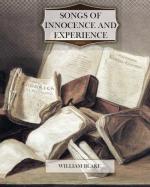 William Blake
This Study Guide consists of approximately 84 pages of chapter summaries, quotes, character analysis, themes, and more - everything you need to sharpen your knowledge of Songs of Innocence and Experience.

Songs of Innocence and Experience Summary & Study Guide includes comprehensive information and analysis to help you understand the book. This study guide contains the following sections:

This detailed literature summary also contains Quotes and a Free Quiz on Songs of Innocence and Experience by William Blake.

The following version of this book was used to create this study guide: Blake, William. Songs of Innocence and of Experience. CreateSpace Independent Publishing Platform, 2017.

Songs of Innocence and of Experience begins with the first book of poems Songs of Innocence. This collection begins with the poem “Introduction,” in which the character of the piper is established as the speaker of the poem as he is petitioned by a child to write down his happy songs for all to read. The collection proceeds as a series of poems, aimed primarily toward children, that celebrate and explore the concept of innocence.

Early poems such as “The Shepherd,” “The Lamb,” and “The Echoing Green” praise the virtues of youth and the relationship between innocence, God, and nature. As the book continues, Blake then turns toward the plight of certain children in contemporary society, such as the black child in “The Little Black Boy,” the lost son in “The Little Boy Lost” and “The Little Boy Found,” or the youthful laborer in “The Chimney-Sweeper.” These poems assure their readers that in spite of the struggles faced by such children, they will eventually be rewarded by God.

Moving onward, the poems begin to examine more closely the relationship between humanity, God, and nature. Poems such as “A Cradle Song” and “The Divine Image” express the Christian view of humanity being created in the image of God and his purity. “Night,” “Nurse’s Song,” and “A Dream” go on to explore the different types of guardians of innocence that exist in the world, such as God, angels, and parental figures. The collection concludes with the poem “On Another’s Sorrow,” in which the speaker reminds the reader that even though they might face strife throughout their lives, God’s infinite affinity for empathy should always comfort and console them.

The second book, Songs of Experience, also begins with a poem titled “Introduction.” In this poem the character of the bard is introduced as the narrator of the collection, characterized by his prophetic qualities and his ability to see into the past, present, and future. In this poem, the bard asks the earth why it will not rise from the darkness it finds itself in. In the proceeding poem, “Earth’s Answer,” the earth responds to the bard, explaining the selfishness and cruelty of humanity has kept her chained in darkness and inhibits her expression of free love.

The collection then proceeds as Blake reexamines some of the characters and themes presented in Songs of Innocence by reimagining the poems in much darker and more critical lights. “Holy Thursday” focuses on the sorrow of the charity school children made to sing at a church service, while “The Chimney-Sweeper” emphasizes the inherent cruelty of forcing a child into labor at such a young and susceptible age.

Blake looks also toward the relationship between humanity in nature once again in Songs of Experience with poems such as “The Little Girl Lost” and “The Little Girl Found,” which tell the story of a young girl who attains spiritual freedom by leaving society and venturing off into the wilderness. Then, in “The Tiger,” Blake questions the authority of a divine creator to give life to such a terrible and beautiful creature. Later, in a trio of poems entitled “My Pretty Rose Tree,” “Ah, Sunflower,” and “The Lily” several different forms of love are examined, using the image of the flower as a symbolic representation of love.

The collection then transitions into a series of critiques of modern society. In “The Garden of Love,” “The Little Vagabond,” and “A Little Boy Lost” Blake criticizes organized religion and the way in which it restricts certain personal freedoms and self-expression. In “London” the poet turns toward urban life by describing the sorrow he witnesses walking through the English city. “The Schoolboy” takes aim at the educational system of Blake’s day, describing the way in which it stunts the spiritual and imaginative growth of young children by inhibiting their ability to play. Interspersed throughout these critical poems, other poems such as “The Human Abstract,” “A Poison Tree,” and “A Divine Image” Blake looks at how such restrictive and prohibitive societal institutions breed cruelty and toxicity in the human soul and spirit.

The second to last poem in the collection is entitled “To Tirzah.” In this piece Blake expresses his frustrations with the limitations of the physical world and the mortal corporeal form, and the way in which it inhibits one’s ability to fully perceive the infiniteness of reality. Finally, in “The Voice of the Ancient Bard” the poet returns one final time to the character of the bard, who beckons the younger readers of these poems to come and rejoice in the dawning of a new age that is unrestricted by the facets of rational society and its oppressive institutions.

More summaries and resources for teaching or studying Songs of Innocence and Experience.

Songs of Innocence and Experience from BookRags. (c)2022 BookRags, Inc. All rights reserved.