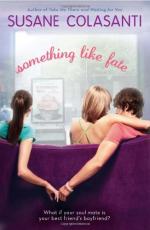 Susane Colasanti
This Study Guide consists of approximately 27 pages of chapter summaries, quotes, character analysis, themes, and more - everything you need to sharpen your knowledge of Something Like Fate.

Something Like Fate Summary & Study Guide includes comprehensive information and analysis to help you understand the book. This study guide contains the following sections:

This detailed literature summary also contains Topics for Discussion on Something Like Fate by Susane Colasanti.

"Something Like Fate" by Susane Colasanti tells the story of 16-year-old Lani. At the end of her junior year in high school, Lani connects with a terrific guy named Jason. He is her best friend's latest crush. Lani is caught between her growing attraction for Jason and her loyalty to her best friend, Erin.

Lani isn't very close to many people, but she is very close to her gay friend, Blake. She is even closer to her best friend, Erin. As the book opens, Erin is obsessed with a new boy in her life named Jason. She asks Blake and Mani to meet him. When they do meet, there is an instant connection between Lani and Jason. Blake sees it, and Lani feels it although she tries to deny it. She doesn't want to hurt her best friend.

As the weeks go by, Lani and Jason eat together at lunch and get to know each other better. They discover that they have a lot in common. The two attend a small school and their friendship doesn't go over well with others. The kids in the Golden Circle feel that Lani left them because she was too good for them. In reality however, she stopped hanging out with them because she didn't feel connected anymore. Now the kids in the Golden Circle are suspicious of her and her relationship with Jason.

She continues to try to keep her feelings under control. Soon it becomes too difficult and Lani feels like they are fated to be together. Jason admits that he likes her and she tells him that she likes him too. He had been afraid to tell her because he thought she was dating Blake. She accidentally tells him that Blake is gay.

Even though they know they like each other, Lani doesn't want to hurt Erin so she doesn't kiss Jason. Erin leaves for camp for the summer, and Lani isolates herself at home and at work. Blake encourages her to go after love. As she works, she wonders if she is making the right choice, avoiding Jason. When she meets him in the grocery store, she feels as if it's a sign to pursue their relationship. Jason tells her he and Erin broke up and they make plans to get together soon.

They spend time over the summer getting to know each other, kissing for the first time on the 4th of July. Lani sneaks out at night to meet with him regularly. They keep their relationship secret until after Erin comes home.

Jason ends up telling Erin about the relationship in an email. She is furious and Lani agrees to stop seeing Jason. Almost everyone at school treats her as an outcast - even Blake who is mad at her because the fact that he is gay has now become public knowledge.

Lani lives as an outcast for a while and then helps Blake when he is in trouble. They become close once again and he encourages her to get back together with Jason. After some soul-searching and after looking at some positive role models, Lani realizes that she can change her fate. She confronts Erin and they become friends again. She also talks with Jason and they begin dating again.

More summaries and resources for teaching or studying Something Like Fate.

Something Like Fate from BookRags. (c)2022 BookRags, Inc. All rights reserved.