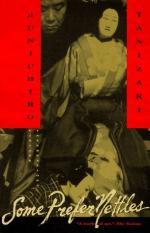 Jun'ichirō Tanizaki
This Study Guide consists of approximately 32 pages of chapter summaries, quotes, character analysis, themes, and more - everything you need to sharpen your knowledge of Some Prefer Nettles.

This detailed literature summary also contains Topics for Discussion and a Free Quiz on Some Prefer Nettles by Jun'ichirō Tanizaki.

Kaname and Misako are a Japanese couple living in Japan in the 1950s. They have been married for ten years and have a son named Hiroshi. For a long time, they have been considering getting a divorce, but they cannot seem to make up their minds.

Kaname and Misako try to keep their marital problems a secret, and in fact only confide in Kaname's cousin, Takanatsu. Takanatsu can hardly believe how long the two of them procrastinate deciding what to do and when to do it, and urges the couple to tell Hiroshi what is going on. Takanatsu secretly breaks the news to Hiroshi, and then tells Kaname and Misako that he will not visit them any more until they have resolved the matter. Kaname has lost interest in Misako sexually after about two years of marriage, although he visits prostitutes once in a while. Two years ago, Misako confessed to Kaname that she is interested in a man named Aso, and with Kaname's permission, she has been having an affair with Aso, and now wants to marry him. For the last several years, Kaname himself has been secretly going to see a Eurasian prostitute named Louise, who presses him for more money.

Misako's father is fascinated with all things that are old-fashioned and Japanese, and so he keeps a young mistress named O-hisa, whom he dresses up in old kimonos like a doll. O-hisa waits on the old man hand and foot and plays ancient music for him. The old man loves traditional Japanese puppet theater, and he prevails upon Kaname and Misako to come see some puppet shows with him and O-hisa. Although Misako knows she will be bored and Kaname expects to be, he finds that he is fascinated by the art of puppetry, and comes back for more performances with Misako's father and O-hisa. Kaname is torn between his love of the ancient traditions of Japanese culture and the more modern, Western ideas and technology. He thinks about two opposite ideals of the perfect woman, epitomized by O-hisa and a Hollywood movie star. Kaname finds out that Misako does not really want to marry Aso, and he feels bad for having pushed her to be unfaithful. Nonetheless, he has so little interest in her that he does not see how he could possibly stay with her for the rest of his life, and he knows that she badly wants out of the marriage. He finally tells his father-in-law what they plan to do, and he and Misako stand firm in the face of her father's arguments as he tries to make them stay together.

More summaries and resources for teaching or studying Some Prefer Nettles.