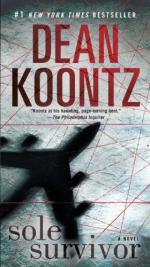 Dean Koontz
This Study Guide consists of approximately 103 pages of chapter summaries, quotes, character analysis, themes, and more - everything you need to sharpen your knowledge of Sole Survivor.

This detailed literature summary also contains Topics for Discussion and a Free Quiz on Sole Survivor: A Novel by Dean Koontz.

Sole Survivor is the story of one man's struggle to come to terms with the loss of his entire family in a plane crash. When faced with a mystery that challenges the reported reasons for the crash, Joe Carpenter embarks on a journey that changes him mentally, emotionally, and physically. This journey brings him the salvation he did not believe could transpire.

It is the one-year anniversary of the crash that took the lives of Joe's wife and two daughters. After waking from another nightmare, he calls his mother-in-law. They chat about the day and the significance it holds for both of them. Joe goes back to sleep for a few more restless hours before climbing out of bed to start the day. He is going to the cemetery to mark the tragic anniversary. Before he gets to the cemetery, he stops at a beach in Santa Monica so he can drink a few beers and stare at the surf. He is interrupted by two young men who tell him he is being watched by two guys in Hawaiian shirts. Shrugging off their concern, Joe makes a trip to a public restroom. When he arrives back at his spot on the beach, he notices two young women nearby who seem to be keeping him under surveillance as well. Believing that they have made a mistake, he gathers his belongings and continues his journey to the cemetery.

He reaches the cemetery and is shocked to discover a mysterious woman photographing his family's grave markers. Surprised by his approach, she tells him that she is not ready to talk to him yet. She soon runs away as a white van approaches at high speed. Two men from the van take up chase leaving a bewildered Joe to stand there in his confusion. He decides to check out the van and discovers hat it is full of surveillance equipment. He also discovers that his car has been tagged with a tracking device. He leaves the cemetery and heads to his old place of employment. Upon arrival at the offices of the Los Angeles Post, he goes to his old desk and starts gathering information concerning who owns the white van. His search provides him with more information than he was expecting, thus opening him to a whole new mystery he feels compelled to solve.

Based on some of what he discovered at the Post, he sets up a way to meet the mysterious woman from the cemetery. She turns out to be Dr. Rose Tucker who claims to have survived the plane crash. Adding this knowledge to what he uncovered in his research, he prepares to meet with several of the families who lost loved ones in the crash of Flight 353. His visits only add to the sense of something being not quite right with what the investigators claimed happened to bring down the 747. Following his reporter's hunches he makes contact with the lead investigator who canvassed the crash site. What she tells him only leads him deeper into the intrigue.

When he finally meets Dr. Rose Tucker, she explains in detail precisely how it was she survived the crash as well as the reasons for being chased by the two men at the cemetery. This ultimately fuels his impetus to help her bring down her former employers. By doing so, he brings about his own salvation.